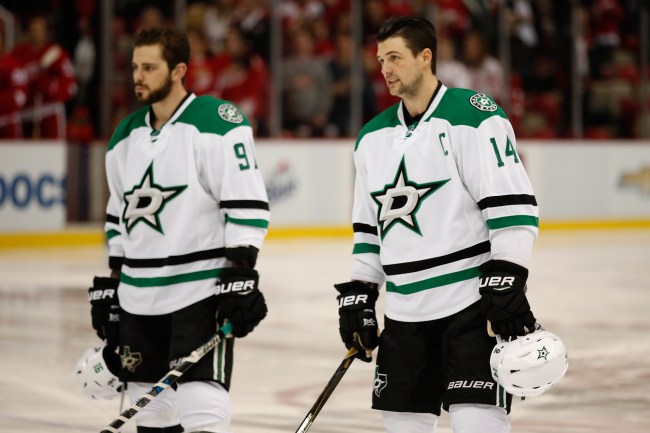 Dallas Stars CEO Jim Lites didn’t mince words when he talked about the team’s two highest-paid (and most recognizable) stars, Jamie Benn and Tyler Seguin, with the CEO going all in by saying that the two are “f*cking horse-sh*t,” per ESPN, via The Athletic‘s Sean Shapiro. The tirade didn’t stop there, though, as Lites detailed to The Athletic that the feelings are mutual from ownership, which includes team owner Tom Gaglardi. Here’s what The Athletic report had to say.

That’s the text that Dallas Stars CEO Jim Lites says he gets five times per game from team owner Tom Gaglardi. It happened again on Thursday night when he was watching the Stars’ 2-0 win against the Nashville Predators.

“He’s pissed,” Lites said on Friday afternoon. “And you know what it’s about. They are fucking horse-shit, I don’t know how else to put it,” Lites said. “The team was ok. But (Tyler) Seguin and (Jamie) Benn were terrible.”

Well, tell us how you really feel, Jim.

According to the report, the team’s ownership began getting frustrated during skate around prior to the Dallas Stars game against the Predators last nigh, when the team’s head coach, Jim Montgomery, said he was “f*cking embarrassed” with the team’s practice and where they are in the standings — which is currently 8th in the Western Conference. After Montgomery ignited a spark, Jim Lites turned it into a full-fledged fire with his comments, which continued to focus on both Jamie Benn and Tyler Seguin.

“For me, it’s pissed me off,” Lites said. “What nobody says is what is completely obvious to me: We are getting terrible play from our top two players. … We are a stars-driven league, and our stars aren’t getting it done.

“We’ve had meeting after meeting after meeting,” Lites said. “The accountability on the ice [from Benn and Seguin] is not there. These guys were signed to big contracts because they were the third- and sixth-leading scorers in the National Hockey League over the past five years. They get their money, we expect them to not be outplayed every game we play in. And if they were as good as they’ve been in the past we wouldn’t be having this conversation.”

“I think it’s pretty self-explanatory: If this team wants to get to the next level, that starts with myself,” Benn said. “And that’s exactly what needs to happen, we need to get better.”

The 29-year-old Benn is currently leading the Dallas Stars in goals with 15, while also having 15 assists. The 26-year-old Seguin has totaled 11 goals and 21 assists for the Stars, so they’re getting the job done well enough on their own team, just not in the eyes of management, apparently.

Making matters worse are their contracts, with Jamie Benn earning $13 million this season, and Seguin recently signing an eight-year, $78.8 million extension, so expectations for the two players are higher than other players on the Dallas Stars.

In response to the criticism from upper management and ownership, Tyler Seguin did say he has “got to play better. I’m trying to do a job, and I haven’t had the right results,” so he’s taking responsibility for not living up to his contract and star status. Still, maybe the comments from Jim Lites, owner Tom Gaglardi and head coach Jim Montgomery should be kept in private rather than made so public. It’ll be interesting to see how this all unfolds.