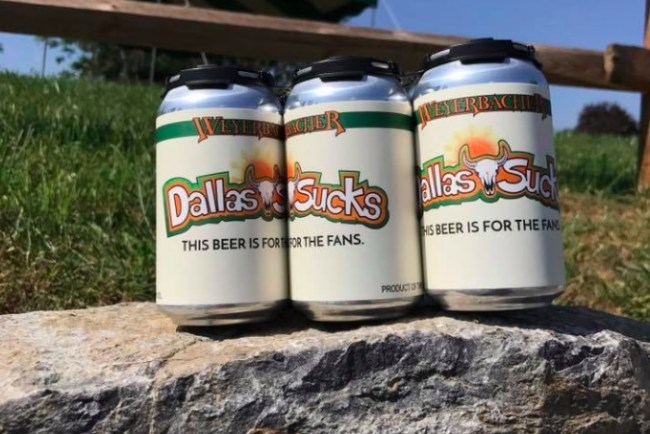 I’ll let me bias show here for a second: I hate the Cowboys. As an Eagles fan, always have, always will. Sure, we’re pretty scrappy in Philly, but ‘Dem boys and their obnoxious fans will always be the worst.

That’s why I love this move from Easton, Pennsylvania’s Weyerbacher Brewery. A couple weeks ago they rolled out a special “Dallas Sucks” beer as a dig at the Cowboys. The brewery says it was made “for tailgating in parking lots, celebrating first downs and big hits, high-fiving friends and basking in the thrill of victory.” And before you’re quick to slam Philly fans for being Charlie Kelly-style trash, note that a portion of the proceeds from the beer are act

With hurricane Harvey beating up Texas, we wanted to make sure that a portion of the proceeds from the sale of Dallas Sucks went and did some good as well, so we’ll be donating to the Red Cross to help people affected by the hurricane. Here in PA, we take football seriously, but we also take caring for our fellow Americans seriously.

Meanwhile, Noble Rey Brewing in Dallas is stepping up to the occasion. The great Cowboys-Eagles brewery beef war is officially on. via LVB:

Noble Rey Brewing Co. of Dallas created its own German-style gose beer and is calling it “Eagle Tears,” with a promise that its beer won’t leave a “ring” on your table.

Oof. That’s cold, but deadly accurate. In Wentz we trust.