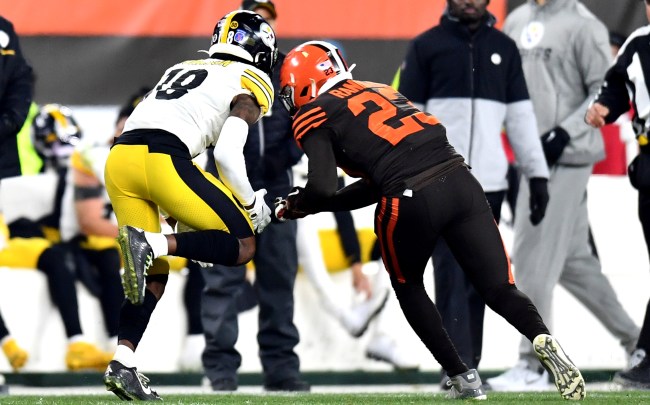 Sports fans can be, well, they can be not very smart. Complaining about a player dropping a game-tying touchdown? That I can pretty much understand. Sending a player, like Cleveland Browns free safety Damarious Randall death threats over something that happened on the football field? Stupid.

Why is that the go to for so many fans? In 2019 alone, fans have sent death threats to the Rams’ Nickell Robey-Coleman, a meteorologist, the wife of the owner of the Warriors, the Dolphins’ Kenny Stills, and Penn State’s Sean Clifford. And those are just the ones we’re reported about this year.

The Bears’ Cody Parkey also got them. As has the Bruins’ Jake DeBrusk, basketball star Andrew Bogut, and the newborn daughter of Atletico Madrid head coach Diego Simeone. Seriously.

Damarious Randall is just the latest athlete to have to deal with death threats from keyboard warriors as he says he received several of them from fans after his helmet-to-helmet hit on Pittsburgh wide receiver Diontae Johnson in Cleveland’s 21-7 win last Thursday over the Steelers.

“How is it, from the standpoint, after the hit … I get so many death threats, so many people calling me names, people saying, ‘Oh, I hope you get hurt, I’m going to kill you, this and that,'” Randall told Cleveland.com. “And it’s okay for fans to do it to us but then when we say something back, it’s a problem, we get in trouble. I just never understood that.”

Randall had previously gone on record stating that his hit on Johnson wasn’t intentional, which is certainly debateable, but still… death threats?

Steelers WR Diontae Johnson was bleeding OUT OF HIS EAR after taking the hit 😳 #PITvsCLE pic.twitter.com/RqoKl0FDFl

Randall, who says he apologized to Johnson on Instagram and had never been flagged for a personal foul or been ejected in his NFL career, added, “I was just saying some prayers about it and that actually bothered me a little bit that he was laying there like that, because it just shows how dangerous this game is and how dangerous this game can be. Really, I just never intend to hurt anyone.'”

The defensive back also brought up former teammate Jermaine Whitehead who was cut after threatening to kill a fan and calling media member a “cracker” on social media.

“It’s just funny to me how they blurt out and just say crazy, off the wall stuff, but just like the situation with one of my former teammates,” Randall pointed out. “He lost his job behind something like that, but it’s okay for them to openly say stuff like that. I find that so crazy to me.’”