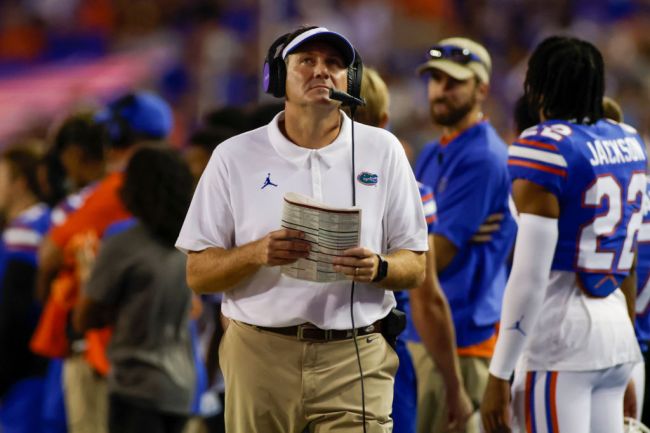 Two short years ago Ed Orgeron coached LSU to a national title behind the arm of Joe Burrow. Now, he’s firmly on the hot seat in Baton Rouge, and by the looks of things, his days could be numbered as the head coach of the Tigers.

LSU is 3-3 on the year, is riddled with injuries, and is trending in the wrong direction with only a home game against Louisiana-Monroe on Nov. 20 as the one game left on the schedule the Tigers can pencil a win in. The Tigers could easily finish the year 4-8. LSU welcomes No. 20 Florida to town this weekend in what many are saying could be a make-or-break game for Orgeron.

If LSU can pull off the upset, Orgeron’s seat would cool off significantly, but perhaps only buy him until the end of the season before LSU hands him his walking papers.

Florida head coach Dan Mullen was asked about Orgeron being on the hot seat during his Monday press conference and was refreshingly honest about the situation.

“It’s a weekly deal right now as coaches, right,” Mullen said at his Monday press conference. “I think we get to learn that. I’ve known Ed for a long time, I like Ed, great coach. Won a national championship just a couple of years ago there, and you haven’t forgotten how to coach in that time frame.”

No, Orgeron hasn’t “forgotten how to coach” since winning a national title, but he also doesn’t have Burrow under center and playmakers all over the field to perhaps shield his inability to coach in big moments.

“I just think in today’s world, with coaching a lot of times, it’s a week to week, your rating as a coach is week to week,” Mullen continued. “If not play by play on Saturdays, and then after Saturday, it’s week by week. That’s not him, that’s all of us. You know what I mean, you go to anybody in the SEC and they’ll tell you it’s pretty much you’re either really smart, or really dumb and there’s nowhere in between, and it’s a week to week deal.”

The fact that Florida at LSU is the noon SEC game on Saturday should tell you everything you need to know about where LSU is as a program at the moment.