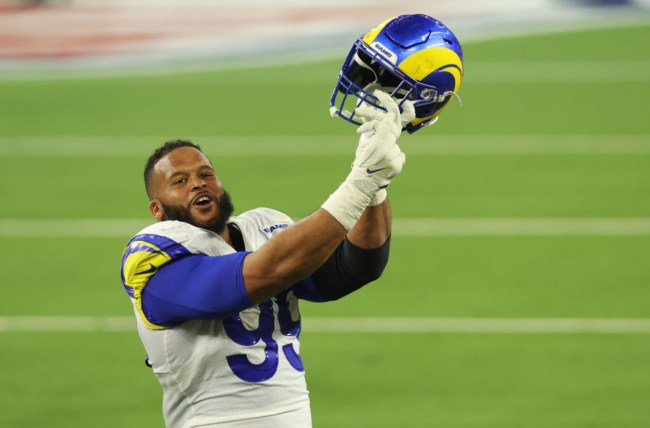 Dan Patrick, just like plenty of other people out there, believes that Aaron Donald, not Cooper Kupp, should have been named Super Bowl MVP for his performance against the Bengals. He also thinks that the way the award is voted on had a lot to do with him not winning the award.

During Monday’s edition of ‘The Dan Patrick Show’, Patrick made his case for Donald while dropping an interesting note about how and when MVP voting takes place.

Given the number of people that vote on the award and the limited time, votes are cast during the two-minute warning, according to Patrick. This of course means that everyone put in their vote before Cooper Kupp hauled in the winning touchdown, but also well before Donald made the game-winning play in Cincinnati’s backfield on fourth down.

“I think with the votes being tabulated before the two-minute warning, Aaron Donald to me was the most valuable player last night,” Patrick said. “If you’re going to make this argument that the Bengals knew Cooper Kupp was going to get the ball, they double-teamed him. Well, Aaron Donald is double-teamed on every play, sometimes triple-teamed.

“While he had a quiet first half, I thought that [Donald’s] stops were a difference-maker. Cooper Kupp was wonderful, but I thought Donald was the most valuable player.”

“I think if you voted when the game was over. They have to do it prior to the two-minute warning because when we get ready to hand out the Super Bowl trophy, we have to know who the MPV is.”

"Aaron Donald to me was the most valuable player last night."

-DP recaps #SBLVI and explains why he thinks Donald should have won the MVP #Rams #Bengals pic.twitter.com/cTqCP8E2vg

It certainly makes sense that the NFL needs some time to collect and count the votes for MVP, so taking those before the two-minute warning is understandable.

However, say the Bengals went down and won the game on a last-second play with a Joe Burrow to Ja’Marr Chase touchdown. Chase or Burrow would have taken home MVP honors, yet the votes were already counted for Donald because they were taken so early.

The NFL would have pivoted in that case, of course, which proves it could have for Donald’s sake on Sunday night as well.