Dana White Slams Conspiracy Theorists, So Why Hasn’t Conor McGregor Been Suspended Yet? 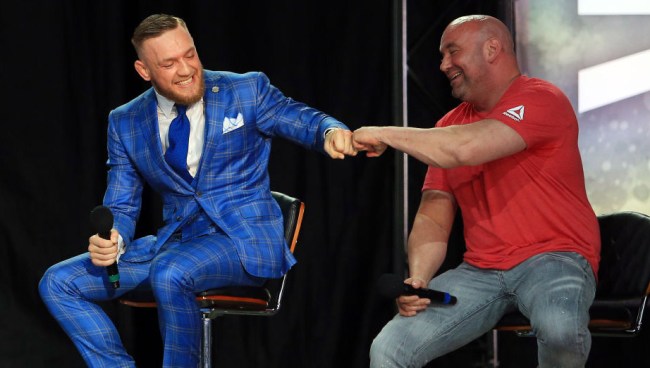 Ever since Conor McGregor lost his damn mind at the Barclays Center, throwing everything that wasn’t nailed down at a couple buses, people have been speculating as to whether or not the whole fracas was just a publicity stunt to hype up a future UFC title fight between McGregor and Khabib Nurmagomedov.

As for the reason why so many people believe that McGregor’s insane actions at the site of UFC 223 was a publicity stunt, Dana White need only look at himself in the mirror.

The one. The only. The champ champ.

You’s’ll strip me of nothing you’s do nothing cunts.

Granted, if it was a publicity stunt then McGregor, who hasn’t even competed in the UFC since November 12, 2016, went way off script when he injured other fighters and affected the UFC 223 fight card. And if that was the case, then Dana White has no choice but to 100 percent deny any knowledge or culpability, lest he be sued from here to oblivion.

So since Dana White is so vehemently denying McGregor’s actions being any kind of publicity stunt, surely we will be hearing soon about how McGregor is suspended from competing in the UFC for at least a year or more, right? I mean, if literally any other UFC fighter had done what Conor McGregor did White would have probably banned him for life on the spot.

White can say that people spouting “conspiracy” is “the dumbest thing I’ve ever heard in my life” (as he does below) all he wants, but unless McGregor receives a punishment equal to what any other UFC fighter would receive for his actions on Thursday, then the conspiracies will never, ever go away.