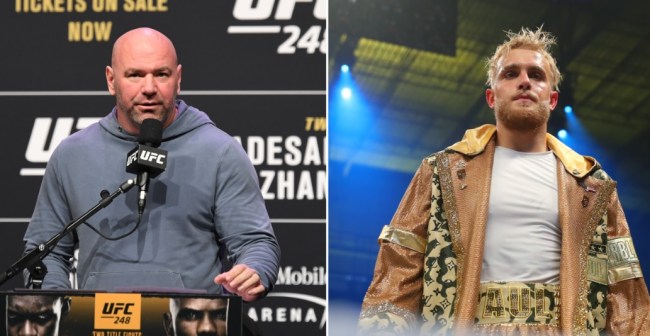 Earlier this week, Paul made headlines when he dissed UFC two-division women’s champion Amanda Nunes after she called him out to a fight.

She’s the greatest, but she’s got one million followers on Instagram, s—ty engagement,” “There’s not a lot of hype there. Plus, there’s no history. I wanna knock out Dilon because we’ve been talkin’ s—t back and forth for two years, I’ve hooked up with his girlfriend, he’s all butt-hurt about it. There’s history there. And Dillon is Conor’s best friend, and I ultimately want Conor. So why would I waste my time doing some bulls—t s—t like that?”

White saw Paul’s quote and blasted the former Youtuber for talking so much trash to MMA fighters.

Via Shout! The Buffalo Podcast

Amanda Nunes will knock that kid out, “To even think about that guy fighting, he’s like, ‘I’m never going to fight a woman.’ You shouldn’t. You shouldn’t because she’ll put you in a coma. That guy is just some kid off the street. One of the big problems with him right now, he’s lucky there’s a pandemic. He’s talking smack about real people – real people that he could run into at a restaurant some night and things like that. This isn’t a real guy. This is just some kid on YouTube.”

White acknowledged that Paul will make plenty of money doing celebrity boxing fights, but he’s not interested in what the Paul brothers are doing at all.

. It’s all a big gimmick. Like I said in a (recent) press conference, there’s a market for that. If people are dumb enough to spend their money watching that (expletive), I don’t know what to tell you. Good luck to them. I (couldn’t) care less what that guy (does). I get it. He’s trying to make some money and is doing his thing. There are people who want to spend money on that. I’m not that guy.”

Doesn’t seem like there’s going to be a Jake Paul-UFC crossover anytime soon.