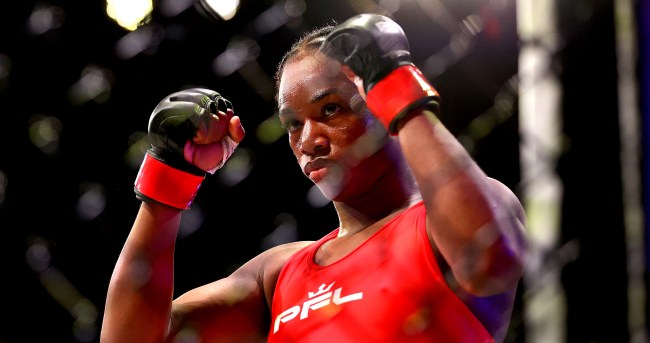 For some reason, YouTube star Jake Paul has been calling out the most decorated female boxer in history, Claressa Shields, ever since he defeated a former NBA player, Nate Robinson, in a boxing match.

“Jake Paul is making his money, he’s doing his thing, but stay away from us real fighters,” Shields, a two-time Olympic gold medalist and holder of all four major world titles in boxing, told TMZ Sports in response to Paul’s goading. “And anybody out there that say, ‘Oh, Jake Paul will destroy her because she’s a woman’ … I’m the greatest woman! So, no, Jake Paul won’t do nothing with me, and if he think he can, he can come see me.”

Don’t get me started about @Claressashields

10 months later and the feud between Shields and Paul is still going strong, mostly due to the fact that Jake Paul’s fights keep generating big paydays.

When asked if she’d ever want to be on a undercard for one of Paul’s fights, Shields said she would never be on the undercard of a guy that’s “having a circus show.”

. @Claressashields says she would never fight on a @jakepaul card. Says she can beat Jake Paul right now in boxing. @PFLMMA pic.twitter.com/YQr7k0LY2V

Then, in the lead up to her PFL fight against Abbigail Montes, Shields was once again faced with having to talk about the YouTuber.

“I box for real,” Shields said, adding that she would “embarrass” Jake Paul using just one hand in a boxing match.

Claressa Shields says she would "embarrass" boxing @jakepaul with one hand "I box for real, I'm not a play fighter" @Claressashields @PFLMMA #pflmmachampionships #pflmma pic.twitter.com/UFdmENvxOg

So when Paul called Shields “fake” and a “loser” on social media after her split decision loss to Montes, it raised more than a few eyebrows including those of UFC president Dana White.

“He better be careful, she might knock him out,” White told MMA Fighting.

“So Jake Paul calls Claressa Shields a loser? Claressa Shields is nothing but a winner who actually fought real people in her weight class in her own age in her own sport and then goes over to MMA and tries to win a world title. That’s not a loser, that’s a winner, okay?

“When are you gonna start fighting somebody your own f—ing age, your own weight, that actually fights in your own f—ing sport that you’re claiming you’re in? Shut the f— up, you goofball. For you to call Claressa Shields a loser is f—ing unbelievable.”

White went on to praise Shields for attempting to cross over to MMA after so much success in boxing.

“Nothing but respect for her and she should just keep plugging along and keep training and doing what she’s doing. Obviously, she’s a very talented, gifted athlete. Crazy that anybody’s saying anything to her, that’s ridiculous.”

When told that Shields said she could knock Jake Paul out with one hand, White agreed.