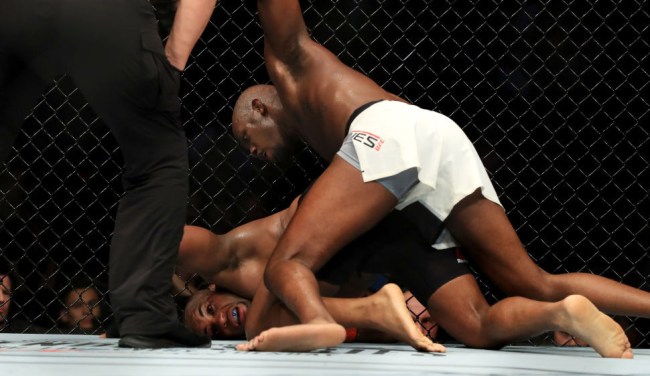 A day after losing his light heavyweight belt to Jon Jones at UFC 214, Daniel Cormier broke his silence and issued a classy statement about Jones, the fight and his devastating loss.

First off, thank you all for the kind words. I have felt the support. Congratulations to Jon Jones and his team. They did a phenomenal job and got the victory.

Also, to Big John McCarthy, I would like to apologize for acting up with you. I am thankful for the time you gave me to try and defend myself and stay in the fight. You are the best in the business for a reason.

I also wanna thank my team and my coaches. I love you all from the bottom of my heart. Your time and energy is greatly appreciated. You guys did a wonderful job, I was ready. It’s a fist fight and things happen.

Dana White and the @ufc, thank you for being the premiere [sic] organization in all of MMA.

Again, congrats to Team Jones and JacksonWink. Love you all. I’ll see you soon.

Cormier wasn’t the only one to reverse course and suddenly have kind words for his opponent post-fight either. Jones, who gave as well as he took in the pre-fight trash talking, also expressed tremendous respect for his opponent following the fight.

“I want to take this time to thank Daniel Cormier for being my biggest rival and motivator. Daniel Cormier, guys, he has absolutely no reason to hang his head,” said Jones in the Octagon after his win. “He has been a model champion, a model husband, a model father, a teammate, leader and I aspire to be a lot more like that man. Unfortunately we are opponents, but outside of that he is a true champion for the rest of his life.”

At the post-fight press conference Jones went even further in his praise for Cormier, reports Sherdog…

“I’ve always felt that way about Daniel,” Jones said. “I’ve always felt like he’s a pretty classy guy. A guy to be respected. A standup champion, a model champion. But unfortunately I came into this game at a young age with big ideas. Despite how good of a person he is, there is no mercy in combat, and I had to do what I had to do. It’s either me or him. What happened, happened.

“He should be respected, and I don’t ever think he should be questioned whether he was a true champion or not. In my eyes, he fought two of the toughest guys in the division. He won those fights and he carried himself like a champion. I think that should be recognized.”

As for Cormier’s apology to referee Big John McCarthy, anyone who saw how concussed Cormier was, knows he need not have apologized. Even McCarthy himself said as much.

1/2 @dc_mma U have nothing to apologize for. You have been an incredible champion who has represented the sport of MMA with class & dignity

2/2 @dc_mma you also fought a great fight against an incredible competitor. It was an honor being in the cage with 2 of the greatest #AskBJM

In fact, Big John was hard on himself for letting Cormier absorb what he felt were a few too many blows…

2/2 I have watched the fight 2 many times & believe I should have stopped the fight 2 punches earlier. But I don't get 2nd chances #AskBJM https://t.co/Qn1dQ4oP8c

Whether we will see Cormier in the Octagon again remains to be seen. He is closing in on 40-years-old, but has only lost to one man in his 19-2 MMA career: Jon Jones.

“If you lose both fights there’s not a rivalry,” said Cormier after the fight. “So I don’t know.”

Yes, he is. Next up, Brock Lesnar? Maybe…

Brock Lesnar: "be careful what you wish for young man". The beast is awakening from his steroid forced slumber #UFC214