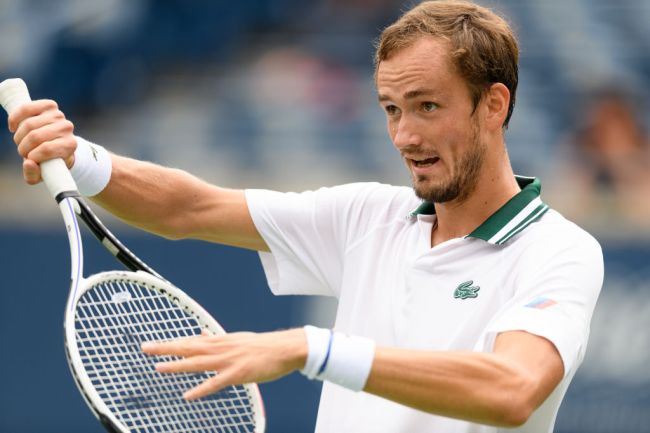 The rules of tennis are incredibly confusing and they often result in hilarious moments. That was the case twice on Tuesday when World No. 2 Daniil Medvedev faced his friend Alexander Bublik.

Medvedev lost the first set to Bublik when a rain delay caused a 53-minute stoppage in play.

Bublik: “Daniil, would you like to join me under my umbrella?” ☔️ #medvedev #NBO21 pic.twitter.com/NXa6t6gYEi

When the two players returned to the court, Medvedev made a strange request to the chair umpire. He asked her if he could take a bathroom break to change his underwear, but he was denied.

“The only chance for me to change my underwear is over there but there are cameras there. I’m okay to do it, but everybody is gonna see me,” he told the official.

Daniil asking the umpire if he’s supposed to change his underwear somewhere in the corner where everyone can see when he’s not allowed to have a toilet break. He said he wouldn’t mind btw 🤣 #medvedev #NBO21 pic.twitter.com/XvBLQ1sos0

Ultimately, Medvedev decided not to change his underwear and the match continued. At 2-0 during the third set, another hilarious moment occurred.

Bublik hit a tweener and set Medvedev up to put the point away. Medvedev smashed the return and accidentally sent it rocketing at his opponent.

Feeling guilty for the direct shot, Medvedev loudly apologized with a “Sorry!”

Somehow, some way, Bublik returned the laser and Medvedev hammered it home for the point. Or so it seemed.

However, despite the clear winner, the chair umpire called Medvedev for hindrance because he talked during the point— something that is technically not allowed.

'This is gonna be on Tennis TV, bro!'

The very technical call was probably unnecessary and it resulted in a fit of laughter between the two opponents. Bublik was laughing the entire time as Medvedev argued with the umpire and initially thought that he was called for hindrance.

He had NO idea what was going on!

The point was not crucial and both players were able to move on to finish the match, which Medvedev won in three sets. He spoke on the hilarious exchange on Wednesday.

Daniil Medvedev on the bizarre hindrance call during his match against Alexander Bublik at the #NBO21 yesterday: pic.twitter.com/7DauoV0jQ4