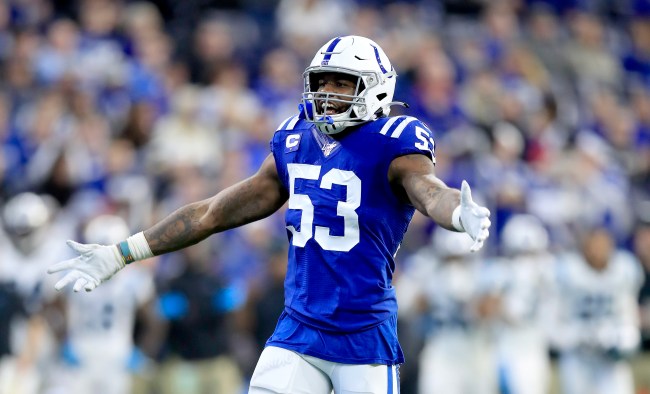 Colts linebacker Darius Leonard’s one of the best defenders in the NFL, with the third-year pro garnering Defensive Rookie of the Year honors in 2018 and reaching a Pro Bowl last season. And while the talented 25-year-old clearly pays attention to detail on the field, he had a little lapse in judgement following his team’s victory over the Minnesota Vikings on Sunday.

While some NFL teams aren’t allowed to have fans in the stands due to social distancing guidelines, the Colts’ Lucas Oil Stadium attendance is able to cap at about 2,500 people, giving players like Darius Leonard a small sample size of supporters during games. However, with fans in the stands comes responsibility — like giving away game-worn souvenirs.

Well, when Leonard tried to make a young fan’s day by tossing his gloves into the stands, the linebacker didn’t account for a pretty special item on his finger: His wedding ring.

According to Bleacher Report’s Tyler Brooke, the young Colts fan got more than he expected when Leonard threw him the gloves, with Indy’s star defender accidentally including the ring. Take a look below at a picture from after the incident.

And this is why no NFL player needs to wear his wedding ring during games. I mean, sure, it’s a nice little gesture to the Mrs. and all, but, outside of a finger getting ripped off with it on, something like this can happen, too. Luckily for Darius Leonard, the young kid wasn’t a dick and decided to send it back to the player ASAP — which is more than some people may have done, who would’ve hung onto it as ransom for season tickets or something. Not that I’d do that or anything…

Happy ending to a funny story from Indianapolis yesterday …#Colts LB Darius Leonard's wedding ring — which came off inside one of his gloves that he gave to a fan after yesterday's win — has been located and is en route back to him in Indianapolis. https://t.co/11pPfk32b7

In the end, Leonard will probably laugh about this little mishap and learn to check before he throws souvenirs into the stands next time. Who knew having fans at NFL games this season would cause such a dilemma, huh?