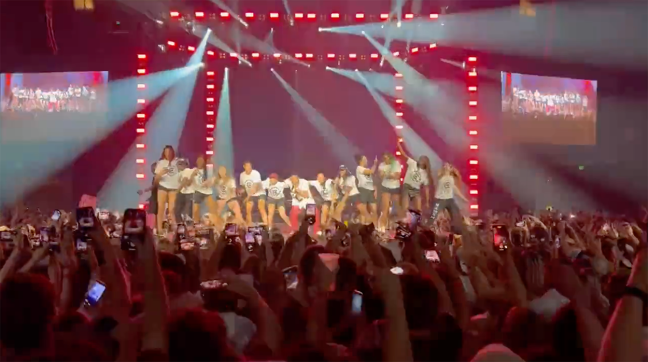 South Carolina women’s basketball didn’t just win a national championship in 2021/22, the Gamecocks dominated their way through every opponent on their way to cutting down the nets. It was worthy of celebration and that’s exactly what they did on Sunday night.

To do so, Darius Rucker, an alumnus of the university, held a (free!!) championship concert on campus. He promised head coach Dawn Staley that if her team won a championship, he would play a free concert. Well, they won and the man formerly known as Hootie kept his word.

Y’all wanna see what love looks like?!! @dariusrucker thank you for coming on back home to bring the @UofSC @GamecocksOnline together under one @CLAmktg roof to celebrate @GamecockWBB national championship….with a FREE concert. This is beautiful! Willy B on deck! pic.twitter.com/PXwuPcK67Z

You are the man ⁦@dariusrucker⁩ !! Thank you for a great night in Columbia

During his performance, Rucker took the opportunity to remind everyone of a very important sentiment that can be echoed across the entire SEC and much of the entire country. He did not hold back.

In addition, Darius Rucker also brought out his friend Nelly, who showed up at South Carolina dripping.

Some of us have been waiting our whole lives to see @Nelly_Mo in a Gamecock jersey.

He brought the team out on stage and was feeling himself.

To close out the evening, the entire team joined Nelly and Rucker on stage. While there, they led the entire stadium in a national championship celebration-worthy ‘Swag Surf’ and it could not have been more lit.

The entire night was well-deserved. The program that Staley has built in Columbia is remarkable and, in this current moment, the most successful team on campus. Sights and sounds from the evening could not have looked like a better way to celebrate the national champions.

WATCH: Some of the sights and sounds from @dariusrucker's concert tonight at CLA celebrating the 2022 National Champion @GamecockWBB team pic.twitter.com/YMdm6tBbOI

And, with Staley being the G that she is, she refused to make the night all about herself and made sure to shoutout another South Carolina national champion.

What a night for a team that simply could not be touched all season.