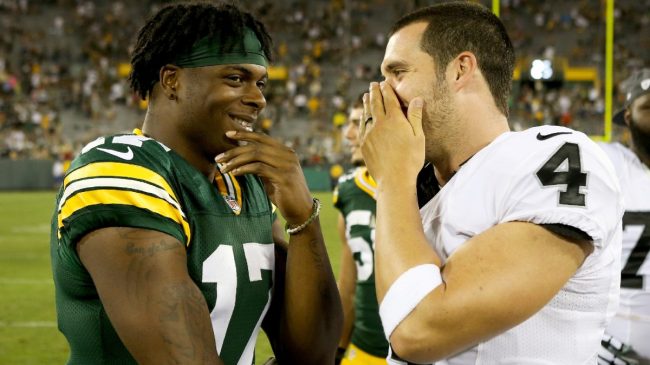 There will be a reunion in Las Vegas when the 2022 NFL season rolls around.

Former college teammates Derek Carr and Davante Adams will look to relive their days at Fresno State as one of the game’s most dominant QB-WR duos.

With the Bulldogs, the pair played two seasons together. In those two campaigns, Carr tossed 87 touchdowns with Adams hauling in an incredible 38 scores. The tag team led Fresno State to 20 victories between 2012 and 2013. They formed one of the most prolific passing attacks in the nation.

They’ll now look to replicate that success in Las Vegas.

Both have already made a name for themselves individually. Carr has been to three Pro Bowls, throwing for more than 31,000 career passing yards. He helped lead the Raiders to a playoff appearance last season where they lost by a touchdown to eventual AFC Champion Cincinnati.

Adams has become one of the most dominant wideouts in the game. He’s racked up 1,300-yard seasons in three of his last four campaigns. His time in Green Bay was capped with a 1,553-yard showing. He led the NFL in touchdown catches the year prior.

Adams was expected to reunite with Aaron Rodgers in Green Bay for the upcoming season, but he spurned a more lucrative offer with the Packers in order to join the Raiders.

Simply put, he wanted to play with Carr.

And it appears Carr tried to sweeten the pot with a promise that he’d given to Adams should they wind up joining forces.

Davante Adams Looks To Cash In On Derek Carr’s Promise

Back in 2021, Derek Carr made a promise to Adams with the wideout testing the free agent market. In an interview with Chris Collinsworth, Carr said, “I’m gonna full-court press… I’ll buy him a car. Whatever I gotta do. He’d fit in so well with our guys.”

This was Derek Carr last year talking about Davante Adams: “I said I’m gonna full-court press the guy when he’s a free agent. There’s no doubt. I’ll buy him a car. Whatever I gotta do. He’d fit in so well with our guys.”

Despite it being a year ago, Adams hasn’t forgotten about the offer. He’s looking to cash in on his new teammate’s promise.

And from the sounds of it, the wideout has expensive taste.

“I’ve been feeling really Ferrari-ish… if I wanna downplay, maybe a Rolls Royce Cullinan. You know, something a little more modest.”

Carr may be opening up his wallet for his new teammate, but it will all be worth it should the duo help bring the Raiders a Super Bowl trophy.