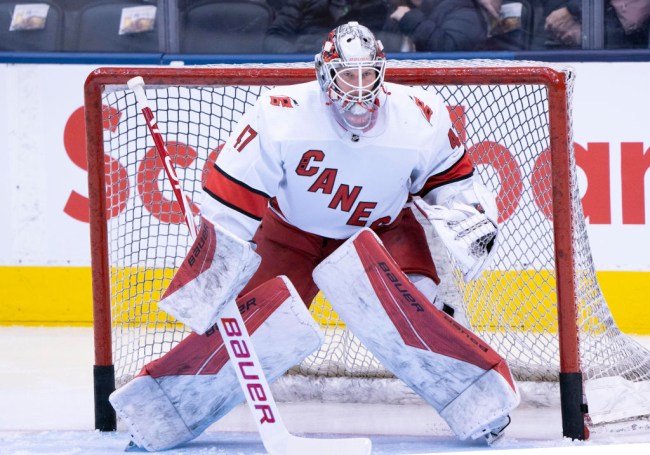 The Carolina Hurricanes lost two of their goalies on Saturday night, but they had a secret weapon in the waiting. The Canes turned to their zamboni driver, and he helped Carolina beat the Toronto Maple Leafs.

Hurricanes goalies Petr Mrazek and James Reimer were both injured in Saturday night’s game against Toronto. The Canes put 42-year-old emergency backup goalie Dave Ayres between the pipes midway through the second period, and they ended up winning!

Ayres usually only hits the ice when he is driving the zamboni for the AHL’s Toronto Marlies. Ayres, who is a kidney transplant survivor, was victorious in his NHL debut.

The emergency backup goalie is in!

After the two other goalies exited the game, Ayres suited up and stopped eight out of the 10 shots he faced, which is no easy task since the Maple Leafs have one of the most potent offenses in the NHL. Ayres suffered from big game jitters and gave up two goals on the first three shots he faced, but he didn’t allow the Maple Leafs to score in the third period.

Here's something you don't see every day.

Ayres even got a shot on goal, because why the hell not! Ayres led the Hurricanes to a 6-3 win against the Maple Leafs and got credit for the win, becoming the first-ever emergency backup goalie to win an NHL game.

Marlies' Zamboni driver David Ayres beats the Leafs as the emergency goalie for the Canes pic.twitter.com/u1OTcH74Ad

Ayres got the first star.

Emergency backup goaltender David Ayres is first star of the game and gets an ovation from Leafs fans pic.twitter.com/5ARqtH1Re3

“Obviously the time of my life out there … once in a lifetime, I’ll take it,” Ayres said after the game.

“It’s been great,” Ayres told Sportsnet. “I told the boys in the dressing room, once we come out for the third, I’ll be settled down and ready to win this one.”

"It was awesome. Time of my life out there."

After coming in as the emergency goalie for the @Canes, David Ayres spoke with @SNkylebukauskas about picking up his first @NHL win. pic.twitter.com/pNaxv6z880

Ayers alleged made $500 for his last-minute effort and gets to keep his jersey.

Pay for David Ayres tonight: $500 and his game-worn #Canes jersey. Here's the contract he would have signed during the game. pic.twitter.com/hVbulQGzla

Ayres has filled in at Maple Leafs practices for the past eight years. Will he get the call to the big leagues after his historic performance? Probably not, but nobody can take away the time he won a hockey game in the NHL.