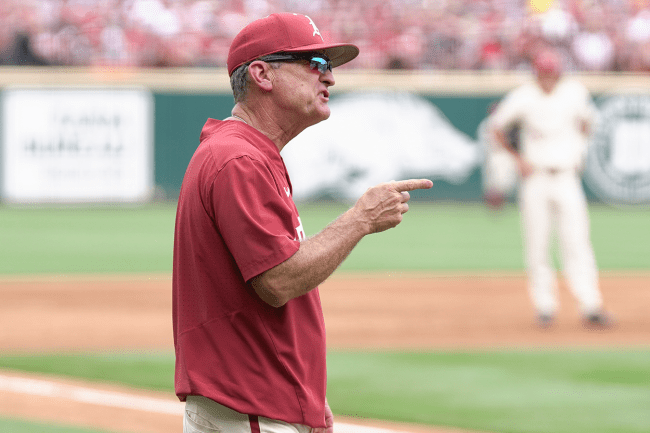 Arkansas’ head baseball coach Dave Van Horn doesn’t like fun. The 61-year-old has been the skipper since Fayetteville since 2002 and has a tremendous track record of success.

However, his teams are only there to play baseball, not get into any shenanigans. His words, not mine.

Here’s the thing about college baseball. It is played by college kids, and college kids like to have fun.

I know that might come as a shock to many, but it’s true. As a result, college baseball includes a lot of fun — or as Van Horn puts it — shenanigans.

Virginia Tech’s Home Run Hammer is one of the most electric things in sports. Ole Miss’ beer shower makes for the greatest environment in college baseball. There has never been a more electric bat flip than Tennessee hitting a walk-off grand slam last season, and bat flips are abundant.

Not at Arkansas. There will be none of that. No fun in Fayetteville.

A couple of years back, before the COVID-19 pandemic shut down the season, Ole Miss upset No. 1 Louisville on a walk-off strike-em-out, throw-em-out double play and celebrated by spiking the ball and hitting a between-the-legs dunk high-five. It was so awesome.

Arkansas fans, even though their team was not involved, immediately got upset, calling the celebration “classless” and “trashy.” In reality, it was fun!

It appears as though that attitude and no-fun-having mindset stems from Van Horn.

The 2022 college baseball season begins on Friday and Van Horn is already upset at other teams for having fun. Even though the season had not begun, he spoke about how his team “just plays baseball” while other teams have “shenanigans” that go on in the dugout.

In other words, other teams have fun and his team does not. Take a listen:

Liked this response today from DVH when asked about Illinois State respecting the Hogs program and their respect for the game.

Says other teams in the league have "shenanigans" that go on in the dugout.

"We just play baseball… some teams, it's a little different." #WPS pic.twitter.com/HHtveCi9CZ

Immediately after Van Horn’s comments went viral, he got dunked all over.

Has Dave ever been to an Arkansas baseball game? https://t.co/qFYcWmck5h

But our shenanigans are cheeky and fun. https://t.co/untcaMOfB4

God forbid you have fun on the baseball field. The gatekeeper of the game strikes again. https://t.co/hL8WFKmg5a

Dude have you met your fanbase? https://t.co/qEhPiBQwCL

“Hi Im DVH, and even though these players work their tails off every day of the year, and have been for the majority of their life, them celebrating success in a game where its based around failure is wrong. No fun allowed, only super serious baseball here.” https://t.co/2yKhijsmRR pic.twitter.com/YMLqAN6yYu

How dare teams have fun https://t.co/LAxU8D6kQW

This gives off some real “Get off my lawn” vibes. These holier than thou baseball geezers need to get with the times. College baseball is FUN so why not embrace the “shenanigans”? https://t.co/zeQjin8zp7

Old guy yells at cloud moment here. International baseball is a far better product then US because the players and fans have fun. They don’t worry about a bunch of unspoken rules and etiquette passed down from drunken hacks https://t.co/FItPPqtnsQ

I bet this guy is a big fan of the NFL taunting rule. https://t.co/bKdf7Yuahr

Credit to Van Horn where credit is due, though… his sweatshirt is awesome.