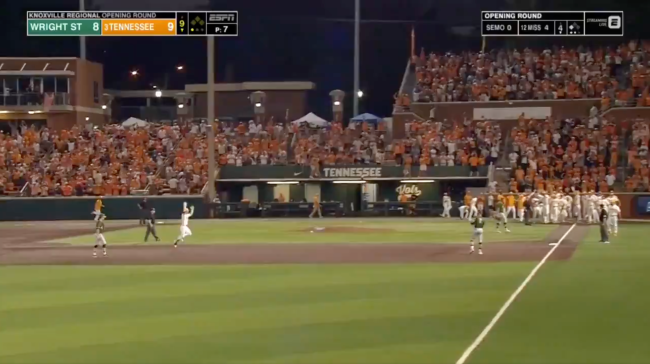 Oh. My. Goodness. This is the bat flip of all bat flips.

Tennessee hopped out to an early 5-2 lead in its first postseason game of 2021. The Volunteers are hosting an NCAA College Baseball Regional for the first time since 2005 and were cruising through the first three innings against Wright State on Friday. The visiting Raiders came out of the Horizon League and are a historically pesky mid-major program. They have strong bats with seven players hitting over .300 and four players with 10+ home runs— 77 dingers in total. Comparatively, the Vols had 84 taters on the year. Lots of offense.

Wright State battled back to take an 8-5 lead and all but one of the 13 combined runs were home runs. The other was a double. Lots of offense.

Alex Alders goes DEEP off the batter's eye in CF and the Raiders chip away at the lead in the top of the 4th.

Tennessee faced a one-run deficit in the bottom of the ninth and worked the bases loaded with one out. The nation’s No. 4 team had two chances to win the game but only needed one.

Drew Gilbert stepped into the box and sent a ball to the moon. Watch every second of this live-angle broadcast. Lindsey Nelson was ROCKING.

Now let’s break down the pimp job. First of all, shoutout to the man behind the camera for the crispiest shot.

Gilbert takes six very slow steps out of the box and turns around. He stares down the opposing dugout for a confident three-count before behind-the-back tossing his bat billions of feet into the air while the Vols dugout explodes. It takes him approximately 11 seconds to get to first base because he turns toward the crowd and screams like a mad man. His entire home run trot takes about 22 seconds.

While running between second and third, the sophomore pumped up the crowd again. Just before touching the plate, Gilbert takes his helmet off and launches it well beyond the pitcher’s mound, seemingly into the shallow infield. Ice. Cold.

LOOK AT THE SAVAGE PIMP JOB ON THIS WALK-OFF GRAND SLAM!! 🚀🥶pic.twitter.com/mGR54zD328

The bat flip was incredible and will forever live in folklore. Gilbert will never pay for another meal in Knoxville again (he already doesn’t).

As glorious as it was, Wright State could come back through the loser’s bracket to beat the the Vols again. Or UT could lose to one of the other visitors — Duke or Liberty. Moments like this are what make college baseball better than the MLB. Even college sports in general, to go one step further.

I won’t wish ill on another team so long as Ole Miss is in the tournament, but would be really funny to see sad Tennessee fans be sad. However, it’s hard to picture a team that is playing this loud at home go on to lose.