David Letterman Pops Up At Nets Media Day To Ask KD What We’re All Wondering: Do The Pelicans Make Him Giggle? 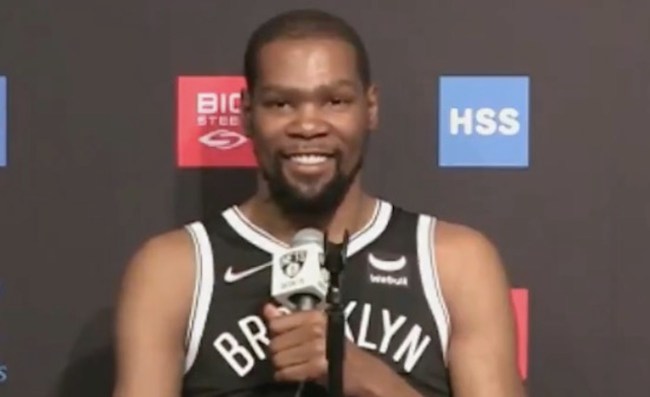 Ever since Norm Macdonald died, I’ve actually been watching quite a bit of old David Letterman clips on YouTube given how often the former would appear on the latter’s show, therefore leading to me tossing on his Netflix series during working hours as it provides the perfect background noise that doesn’t require all that much attention while still managing to both entertain and inform. That David Letterman may know what he’s doing, after all.

Now, as for why the 74-year-old comedy legend popped up at Nets Media Day on Monday, I have no idea. It’s certainly part of a bit, the question is whether it’s for some sort of TV show or he’s just doing it for his own enjoyment. Either way, Letterman being Letterman gave us a couple of hilarious moments during Durant’s presser, as the former Late Show host asked hard-hitting questions such as why people call him KD and whether or not the word “Pelicans” makes him laugh, which is legitimately something I’ve always wondered ever since a professional NBA team decided to name themselves after an objectively hilarious-looking bird.

Kevin Durant is asked why people call him KD:

"My first name is Kevin with a K, and my last name is Durant with a D" pic.twitter.com/fnwIPhIFtM

Durant, though, is hardly the main attraction at Nets Media Day. In fact, the main attraction is not even there, as Kyrie Irving, who has yet to get vaccinated, is not allowed to attend due to New York City’s health and safety protocols. The mercurial Nets guard will reportedly address the media via Zoom later today, which will surely be a sight to behold.

Over the weekend, Rolling Stone published a report about Irving — the 29-year-old former flat-earth-theory believer who currently serves as VP on the executive committee of the players’ union — “following and liking Instagram posts from a conspiracy theorist who claims that ‘secret societies’ are implanting vaccines in a plot to connect Black people to a master computer for “a plan of Satan.”

“This Moderna microchip misinformation campaign has spread across multiple NBA locker rooms and group chats, according to several dozen-plus current players Hall-of-Famers, league executives, arena workers, and virologists interviewed for this story over the past week,” the report states.

Jonathan Isaac, I believe, is the first NBA player to be *this* loudly anti-Covid vaxx. Says he considered unvaxxed players to be vilified and bullied. Came to his anti-Covid vax stance from watching Trump press conferences and now distrusts Fauci. pic.twitter.com/320j1bPvdK

I didn’t even notice this. Kyrie Irving’s aunt says Irving is going to present alternate “research” about why you “necessarily don’t have to take the vaccine” and refers to Fauci as “False-y.” Okay. pic.twitter.com/Tl23qThtWd

"That's his personal decision, what he does is not on us to speculate. I expect us to have our whole team at some point" pic.twitter.com/opXgYTJsxO

If Irving remains unvaccinated, he likely would not be able to play in Nets’ home games due to NYC’s restrictions. Whatever Kyrie does end up saying in his press conference, we’ll be sure to bring it to you, so make sure to check back here if and when that does happen.