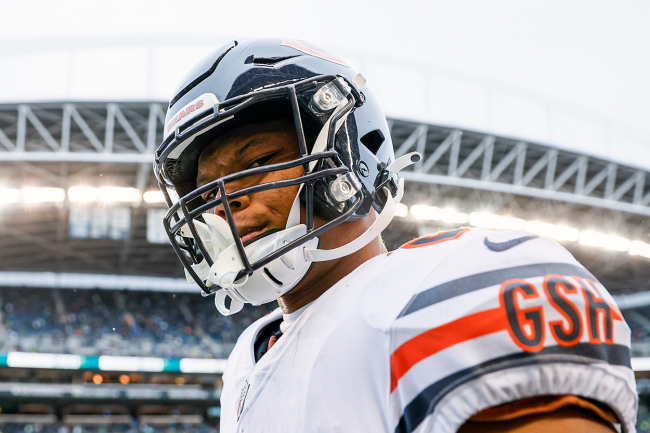 Chicago Bears running back David Montgomery is entering his fourth year in the NFL and is preparing by watching film. In particular, the team has had their star back studying another league-mate to try and learn from where he finds success.

Montgomery, drafted in the third round of the 2019 NFL Draft, stands 5-foot-11, 224 pounds. He ran for more than 1,000 yards in his final two years at Iowa State and then quickly earned the starting job in Chicago as a rookie.

In his first season with the Bears, Montgomery ran for 889 yards. He followed it up with his first 1,000-yard season in the league in 2020, but fell to his lowest total of 849 yards last year while struggling with a knee injury.

I’m excited to see the type of season David Montgomery puts together this year.

With the #Bears getting Teven Jenkins and a healthy James Daniels, his OL should be improved. Another 1,000-yard season could be in Monty’s future. pic.twitter.com/1Gm9iHvsjm

Over the course of the offseason, Montgomery spent his time getting back to full health and preparing for his first year with a new coaching staff. In doing so, Chicago’s running backs coach David Walker has had his top rusher study the NFL’s rushing yards and rushing touchdowns leader from a year ago.

According to Bears running backs coach David Walker, David Montgomery and Colts running back Jonathan Taylor are very similar in their running styles— outside of their 40-yard dash speed.

Walker: "Minus the 40-yard dash speed time … they are very similar in their styles."

Interestingly enough, Montgomery put extra emphasis on his speed during the 2021 offseason and had a lot more burst in the open field last year. Either way, Walker believes that his guy runs similarly to Indianapolis’ 5-foot-10, 226-pound back.

Now, Taylor’s offensive line is much better than the one in Chicago. But his patience, vision and ability to find a hole and accelerate through the next level is the best in the NFL— as seen by his numbers last season.

JONATHAN TAYLOR PUT THE NAIL IN THE ⚰️ pic.twitter.com/hdj9jdr5ny

If Montgomery can take just a few things from Taylor’s running style and implement those notes into his own game, he could become one of the top elite backs in the league. It’s an interesting comparison, but Walker seems confident in what he’s doing.