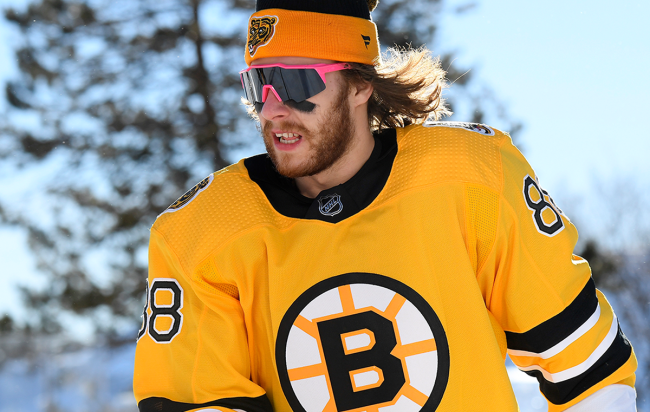 Over the weekend, the NHL treated fans to a bit of a twist on the Winter Classic when it had four teams make the trip to Lake Tahoe, where (as Mike Tirico mentioned approximately 147 times during the two contests) they played on a rink constructed next to the 18th fairway at Edgewood just steps away from the shore of the body of water where fans in various watercraft posted up to try to get a glimpse of the action.

The NHL put the event together in a relatively short span of time and it’s safe to say it showed, as Saturday’s game between the Avalanche and the Golden Knights was delayed eight hours because the league apparently forgot to the Sun exists. Sunday’s showdown featuring the Bruins and the Flyers was ultimately pushed from the afternoon to the evening, and while Tuukka Rask had to spend some of the first period dealing with rays peaking through trees next to the playing surface, it mostly went off without a hitch.

Most players threw on eye black as a precautionary measure, as they sadly weren’t allowed to rock the sunglasses multiple guys donned during warmups—including Colorado goalie Philipp Grubauer, who threw on some shades under his mask while gearing up.

Philipp Grubauer with the shades during warm-ups 😎😂

However, he had nothing on Bruins forward David Pastrnak, who channeled his inner Randy Savage by stepping onto the ice rocking some truly incredible hot pink spectacles.

Pastrnak tallied a hat trick to help Boston come away with a decisive 7-3 win over Philadelphia that gave the team plenty of reasons to celebrate, but unfortunately, Pasta missed out on some of the festivities when he was tapped for what turned out to be one of the best postgame interviews you’ll ever see.

After being summoned, Pastrnak headed out of the locker room with his sunglasses in tow, where he was obviously less than thrilled that his opportunity to dance along with his teammates to “Barbie Girl” was cut short.

David Pastrnak: "We were listening to Barbie Girl before you guys asked me to do media. I was kind of dancing with these glasses out in the locker room then you guys ruined it & I had to go answer questions.

"So I missed the Barbie girl song." pic.twitter.com/OgbiDsbxFx

The Bruins went all-in on the throwback theme ahead of the game, and it’s safe to assume Brad Marchand was the one who threw on Aqua’s magnum opus based on his unabashed love for the tune (sadly, I wasn’t able to find a video of the “Barbie Girl” moment in question, but I assume it’s only a matter of time until it surfaces.)

the look, the walk, the fact that pasta missed "barbie girl" for a zoom interview, this is peak performance from the bruins pic.twitter.com/cnJ6otZX44

Here’s to hoping Pasta managed to make it back in time to get his groove on to some C+C Music Factory.