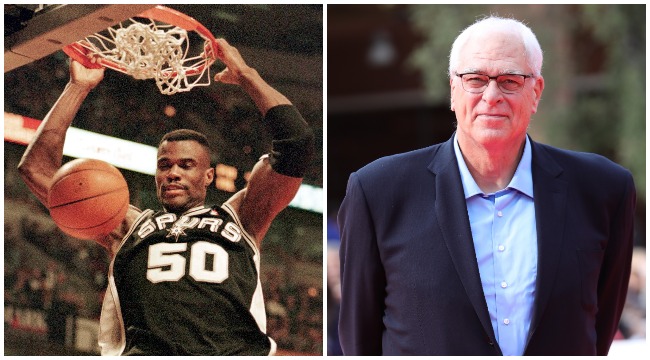 Phil Jackson has always treated the San Antonio Spurs like an Instagram model who never returned his DM.

After the Spurs won their first title in a condensed 50-game season during the lockout in 1999, Phil said the title should be viewed with an “asterisk.”

In 2007, Jackson was reprimanded by the NBA for undermining the Spurs’ 13 3-pointers in a win over his Lakers by way of a sexual reference.

“We call this a ‘Brokeback Mountain’ game, because there’s so much penetration and kickouts,” Jackson said. “It was one of those games.”

And in 2014, Jackson used an unrelated question about Carmelo Anthony taking less money for the sake of the team to tell the world that the four-time NBA champion Spurs are “not a dynasty.”

It’s impossible to say how much of Jackson’s disdain for the Spurs is rooted in David Robinson’s brutal handshake snub during the 2000 All-Star Game (the year after Phil’s ‘asterisk’ comment), but the number has to be non-zero.

Damn. I haven’t seen a handshake snub that cold since…

Just last week, Shaquille O’Neal claimed the first title the Spurs won in 1999 is fraudulent and shouldn’t count towards the ring count.

“I wasn’t into [the postseason]. And I would tell Mr. Duncan this to his face. You have four rings, yeah it says you have five, but the asterisks doesn’t count. Anything I do, I never want an asterisks about it.”

Shaq is my dude, but I’d be interested to hear if he’d have that same opinion if he won in 1999 and ultimately matched MJ’s ring total. For sure not.