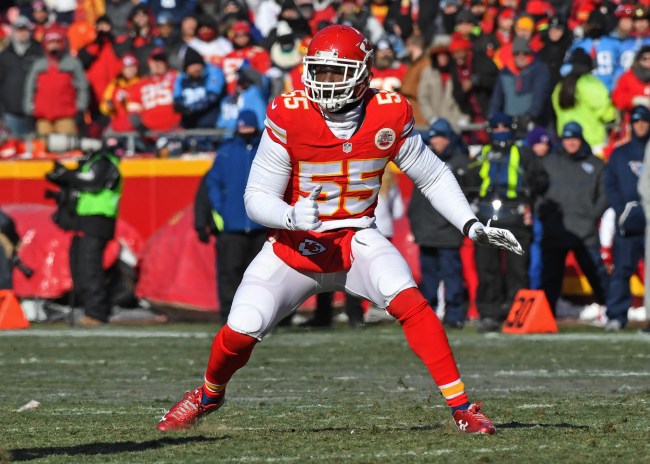 Dee Ford of the Kansas City Chiefs has not had a great couple of days. Sure, he played in the AFC Championship Game yesterday — but didn’t record a single tackle — and his offsides penalty with his team winning 28-24 at the time negated a Tom Brady interception, which, ultimately, led to the Patriots taking the lead. The turnover would have all but sealed the win for the Chiefs, so it was costly to say the least.

Well, since we live in a social media age, Dee Ford has heard it from Twitter trolls about his mistake, with my colleague here Douglas Charles detailing some of the terrible things people online are saying about the defender. Hey, unfortunately, it comes with the territory of being a pro athlete in the year 2019, so, hopefully, it’s nothing the guy can’t handle.

However, the social media trolls aren’t just laying into Dee Ford the football player, but also some unlucky British lady who shares the same name, with people confusing her Twitter account for the Chiefs’ defender. So, yeah, needless to say, she’s been getting a bunch of death threats and all-around hate in one of the most classic mix-ups ever. Take a look at some of her tweets below.

I definitely didn’t swop sides. But hey if there are no Auburn men in my dm’s who knows. https://t.co/zofdQM68KT

Football gear is for after dark only. pic.twitter.com/BbtQGRLk55

I’m not sure I will. You enjoy summer though. Perhaps read a nice, calming book or something until Dee takes you back to the best game you’ve had in 49 years? https://t.co/iuSs6Pr0Ty

I’m going to set up a helpline. pic.twitter.com/VoiUMFfgJB

I forgot messages. At least he said sorry. 😂 pic.twitter.com/L1dRNqpZo7

Um. Who drew Philip into this? https://t.co/TDc2GfQ4Xt

Well so far, that’s it. No death threats. But they called me a bammer. A bammer!! I’m wounded.

Thankfully, Dee Ford the woman is taking all the jabs in stride, seemingly having fun with the whole thing and even consoling some pissed off fans by letting them just get their frustration out on her for having the same name as the football player. If only the other Dee Ford were so lucky to laugh things off, he may have a better day than the past 24 hours has given him.

Ah, yes, social media, you’ve got to love it. Maybe Twitter should do a little bit better next time, though, no?