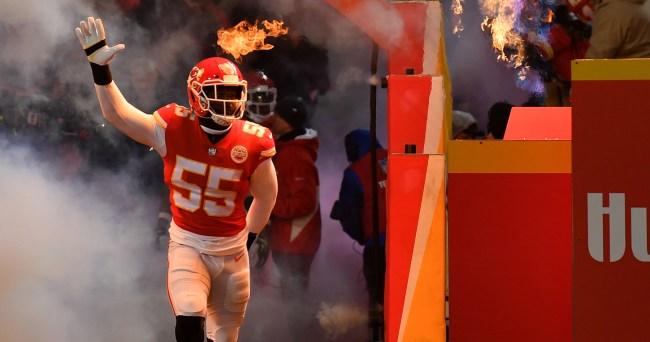 Yeah, yeah, yeah… I know. One play in a game can’t be blamed for costing a team a game. That’s what coaches, players, fans, broadcasters, etc. say when someone costs a team a game with one single play. *cough*Cody Parkey*cough*

It’s a trope we’ve heard time and time again. And while I would like to believe it, try telling that to Saints fans today.

This brutally violent act by the Chiefs’ Chris Jones on Tom Brady drew a roughing the passer penalty. There’s simply no room in the sport for such gruesome violence. Please do not allow small children to watch this video. #NEvsKC pic.twitter.com/WlHo0ICbM1

Especially Chiefs fans, who would be celebrating a berth in the Super Bowl for the first time in 49 years if not for their linebacker Dee Ford inexplicably lining up WELL offsides…

We were six inches away from the Super Bowl… #DeeFord 😞 pic.twitter.com/LVa16zbRLa

"If Dee Ford wasn't offsides, Tom Brady's stat line for this game would NOT have been the stuff of legends." — @getnickwright pic.twitter.com/N0g1xdLiLY

Needless to say, the people who were rooting for Kansas City to beat the Patriots on Sunday were not pleased with Ford following the game, even going so far as to change his Wikipedia page to say he died on January 20, 2019. 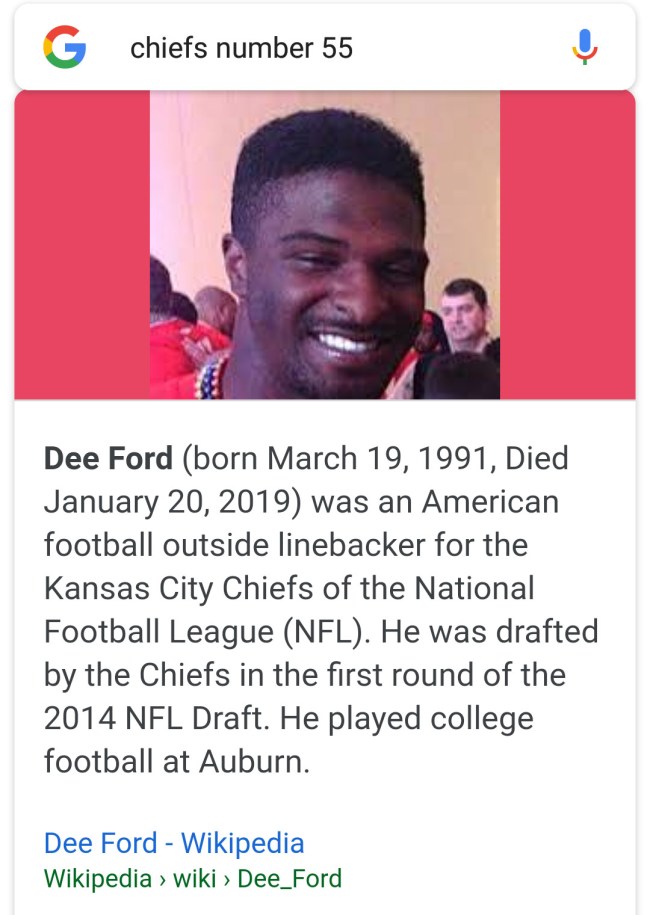 They also changed his position to “Offside linebacker.”

For a few minutes if you googled “neutral zone” Wikipedia showed this. #Chiefs #neutralzone #deeford pic.twitter.com/6vMf3E1Pty

Pretty sure this woman speaks for everyone who was rooting against New England on Sunday.

You do have to feel for Chiefs fans. That one mental error by Ford was more than likely the difference between going to the Super Bowl and, well, what ended up happening.

Dee Ford, HOW DO YOU LINE UP OFFSIDE? pic.twitter.com/Vh5KqBJE4l

This is how Dee Ford parks his car pic.twitter.com/zvcg4sDWHR

Dee Ford you moron. You blew it! #AFCChampionship #chiefs pic.twitter.com/dcbF41ZrVj

Patrick Mahomes waiting for Dee Ford in the Chiefs locker room after the game.

Dee Ford trying to get out of the Chiefs Stadium after the Patriots game. pic.twitter.com/bA7rli39iB

Dee Ford after the game pic.twitter.com/QYrpgPMls4

Dee Ford. Thanks for lining up in the neutral zone pic.twitter.com/jk9d3C7itQ

If there was a time for Dee Ford to remind everyone that he’s ready to make about $17 million or so next season, it’s right now.

It will be a long next few days for Dee Ford knowing that all he had to do was line up onside and his team would be going to the Super Bowl.

Thanks to reader Brad for the tip.