Deebo Samuel Looks Dressed For A Funeral Ahead Of Matchup Vs. Cowboys 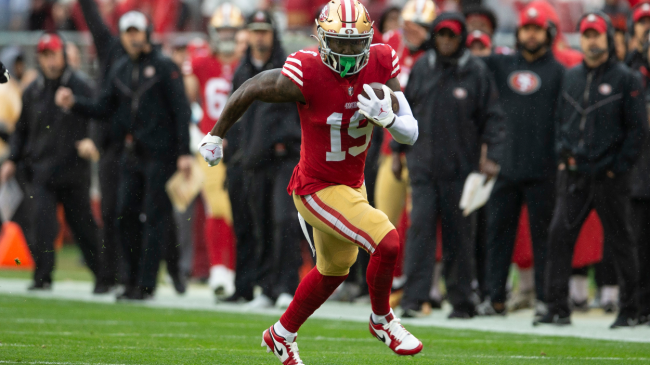 Deebo Samuel made a statement with his outfit choice ahead of a playoff matchup against the Cowboys. The star receiver has now gone viral for his pregame look.

Samuel’s suit looked more like something you’d see at a funeral as opposed to a football game. Many believe that was the pass catcher’s intent.

Deebo arrived at Levi’s Stadium with an all-black custom suit, leather gloves, and matching handbag. The look caused an immediate reaction from fans online, with most saying that he plans to end the Cowboys’ 2022 season.

One fan wrote, “All black for the funeral,” while another joked, “Deebo Samuel looks like he’s on his way to a business meeting.”

Samuel will be all business come kickoff as he looks to keep the 49ers’ Super Bowl hopes alive. The Pro Bowl pass catcher has been one of the team’s top offensive threats, most recently going off for six catches, 133 yards, and a score against the Seahawks to open the playoffs.

The postseason performance was his top receiving output of the year, and it helped the Niners land a third win against division rival Seattle. Deebo’s now racked up 632 receiving yards and 232 rushing yards this season while finding the endzone five times.

Dallas will present another tough task with Dak Prescott leading the charge fresh off of a beatdown of Tom Brady and the Bucs.

If everything goes according to Deebo’s plan, he and the Niners will land their 12th consecutive win while bringing the Cowboys’ campaign to a close.

Related: A Dallas fan FaceTimed Deebo Samuel before the game to talk trash