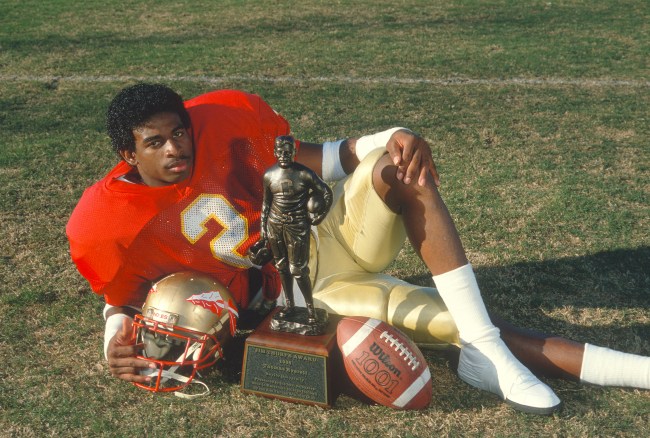 Deion Sanders is a legend in college football, as the former Florida State Seminoles star lit up Tallahassee like never before during his days there, eventually walking away with a slew of honors and awards. Bringing his personal flair, confidence and skills on display before leaving for the NFL Draft in 1989, Deion developed the nickname “Prime Time” for the way he revolutionized the game.

Given this ties to the school, it wasn’t shocking to hear that Deion was linked to the head coaching vacancy that became available after the firing of Wille Taggart during last year’s college football season. While Sanders didn’t get the nod, he didn’t necessarily deny the fact that he was a candidate, which had many salivating at how he could resuscitate the program.

Although Sanders has no head coaching experience, the College and Pro Football Hall of Famer isn’t shying away from the challenge of becoming the leader of a team. In fact, he even went as far as saying that he’ll be coaching a college football team by 2021 — which would be awesome.

Upon hearing the proclamation from Sanders, Twitter couldn’t help but react. As one of the most outgoing, confident, motivational people on the planet, the thought of Deion recruiting teenagers to follow his lead had social media abuzz. Take a look below at some of the reactions.

I have no doubt the he could recruit top notch players. Flashing a couple of Super Bowl rings would definitely get their attention. The players these days would love his primetime persona. He was ahead of his time being an all purpose player.

@DeionSanders a coach for a D1 school next year!? I like it https://t.co/Sf1t6qUB6q

@DeionSanders is looking for HC job in Florida. C’mon @CanesFootball pick him off before someone else does

I would personally LOVE watching Deion cut his teeth coaching at a JC and be featured as the new Last Chance U. Sanders would be perfect.

You can check the entire segment between Deion Sanders and Dan Patrick in the video below.

It’d be interesting to see if a major D-1 program would give Deion Sanders a chance as a first-time head coach. While he’d be a master a recruiting and (undoubtedly) connecting with players, how would he handle the X’s and O’s and the everyday grind? That’d be the biggest question — but, given his football success, there’s probably a university out there who would welcome him with open arms. Guess we’ll just have to wait and see if Prime’s prediction holds true or not.