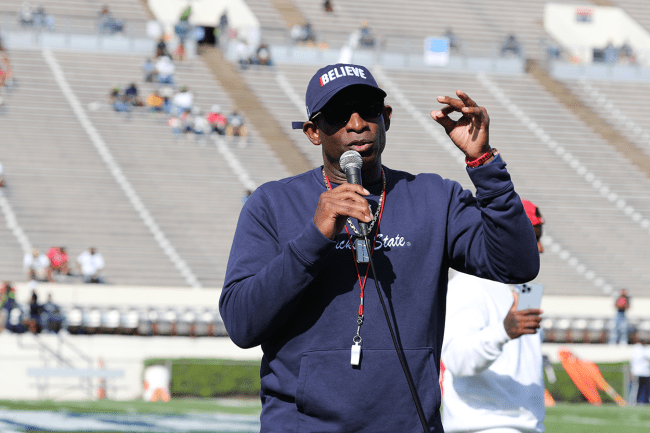 When linebacker James Houston IV transferred from the University of Florida to Jackson State, it was a very big deal. It spoke to what Deion Sanders was (and is) building in Mississippi and it brought a lot of recognition to HBCUs in the process.

However, that chapter of Houston’s career was neglected by the Lions on Sunday. One day after drafting the former three-star recruit in the sixth round of the NFL Draft, Detroit posted his highlights on Instagram.

There was only one problem. All of Houston’s highlights were from his three years at Florida.

To put it bluntly, Houston was good at Florida, but not spectacular. He was not a primary starter and recorded just north of 100 tackles in his his three years with the Gators.

At Jackson State, he was a monster. He recorded 70 total tackles last season, had 16.5 sacks, one interception and two defensive touchdowns.

As a result, Houston was a first-team All-SWAC player and an FCS All-American. His time with the Tigers was a big step forward in his numbers and he was a force to be reckoned with all over the field.

His highlight tape is full of big plays. It’s not like he didn’t have any exposure.

And yet, the Lions completely neglected Houston’s final year on the collegiate level. They did not even include one (1) highlight from his time at Jackson State. Not even one.

Sanders didn’t like that. He, through his son Deion Jr., posted to Instagram and expressed his frustration with the Lions and their highlight tape for Houston.

“You serious @detroitlionsnfl? You post James Houston’s University of Florida Highlights instead of his at Jackson State? With all the trials we go through at HBCU’s, you can at least give us the credit & recognition we deserve. Don’t punish HBCU’s nor our players over A QUOTE that [Deion Sander] said over 20 something years ago…. Btw – At JSU he had 70 tackles (52 solo), 24.5 tackles for loss, 16.5 sacks, 7 forced fumbles, 2 fumble recoveries, 1 interception, & 2 defensive touchdowns”

The quote that Sanders Jr. is referring to was what his father said about the prospect of Detroit picking him in the NFL Draft oh so many years ago.

“I would’ve asked for so much money they would’ve had to put me on layaway,” Sanders said.

Regardless of whether the Lions intentionally neglected Sanders and Jackson State in Houston’s tape over a quote or not, it was a wild and truly bizarre oversight. Houston was not on the radar of many NFL franchises until he transferred to Mississippi and balled out.