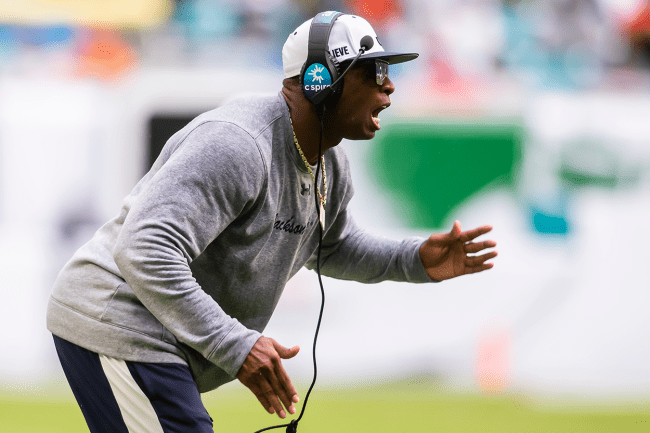 When Deion Sanders took over as the head coach of Jackson State University football in 2020, it brought one of the biggest personalities in football to a program that has not historically received much national attention. The same goes for the schools that the Tigers face on a weekly basis.

As part of the SWAC, Jackson State plays alongside 11 Historically Black Colleges and Universities. The history of HBCUs date back to 1837 and they each have a very unique, celebrated culture, but they don’t often find themselves in the spotlight, particularly within athletics.

That is starting to change, particularly with the Tigers now that Coach Prime is at the helm, which is why the NFL Hall of Famer is so frustrated with a recent decision surrounding his program. He did not have a say in the matter and he is frustrated.

When Jackson State travels to Florida to face Bethune Cookman in October, the game will be played in Jacksonville, not Daytona Beach. The game was moved from BCU’s Daytona Stadium to the Jaguars’ TIAA Bank Field.

While that might seem like a great thing — moving the game to a bigger, flashier stadium — Sanders disagrees. He wishes it was being played on campus.

Coach Prime was asked about the decision at SWAC Media Days on Thursday. He expressed his disappointment.

In Sanders’ eyes, there have been some big waves made surrounding the advancement and exposure of HBCUs. Playing the Bethune Cookman game at a mostly empty NFL Stadium takes away from the entire experience.

Deion Sanders is not happy about the decision to move the Jackson State Vs. Bethune Cookman game to TIAA bank field.

Sanders said "Why we playing in an NFL stadium?" pic.twitter.com/palBa5F6Tr

What Sanders is saying makes perfect sense. While the experience will be awesome for the players, it won’t feel like a true HBCU road game.

Although Jacksonville is not a particularly far drive for BCU fans in Daytona, the stadium won’t be anywhere close to full. Coach Prime would rather have the game on campus so that the bands, the fans and the culture can get its moment.