Deion Sanders Jr. Drove His Porsche To A Protest, Then Complained When It Got Damaged; People Were Unsympathetic 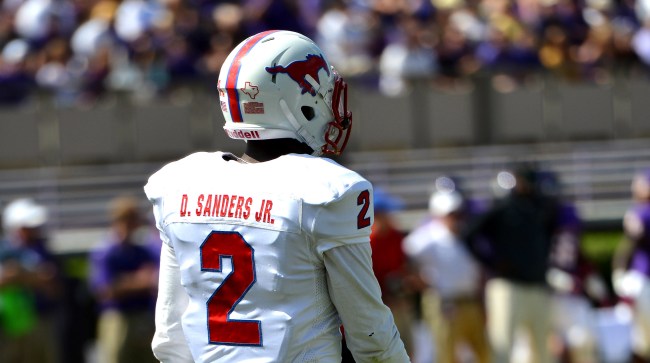 Deion Sanders Jr. used to play football for the SMU Mustangs until one day, after being named Second Team All-AAC as a kick returner he wasn’t on the team for his senior season. In fact, he wasn’t on any football team.

Not that he had it bad. According to the Dallas Morning News, Sanders Jr. lived a college life that 99.9% of us never had or will have.

He had Versace sheets in his dorm room, his own clothing line, and hung out with with Lil’ Wayne while playing for SMU.

Life appears to have not gotten any harder for the son of the NFL Hall of Famer as this week he attended a protest over the death of George Floyd. And he drove there in a Porsche Cayenne which sells for anywhere from $67,000 for the most basic model all the way up to $166,200 base price for the Cayenne Turbo S E-Hybrid Coupe.

Not sure which model Sanders Jr. was driving, but he wasn’t very happy when it got damaged by protesters.

“They done messed up my cayenne… I was out here for hours making sure everybody was straight & directing traffic… but my car got hit,” he wrote on Twitter.

They done messed up my cayenne… I was out here for hours making sure everybody was straight & directing traffic… but my car got hit. I know it wasn’t intentional & nobody knew it was mine, but let’s just stop damaging everything we see. That’s not part of the protest. pic.twitter.com/L2wQcyJCSk

Then, not helping himself, even though he appeared to be trying, he wrote on Twitter, “Granted… I really don’t care. I didn’t even like the car anyway… and it’s just an object, but there’s black people out here that have put they’re EVERYTHING in these businesses or ‘material objects’ that are getting damaged. Let’s stick to the plan & not hurt ourselves.”

For some reason, his messages didn’t seem to resonate with many on Twitter.

Oh did someone destroy your luxury car that you can fix?!? pic.twitter.com/IpW7gkd4Ta

Imagine being able to afford a Porsche, driving it to a potential hostile situation, and then being mad when it gets busted.

Lmao mans drove a porsche to a riot and expected nothing?

Why’d you take your— nvm

lmao. look at you back peddling.

If you didn’t care abt the car you wouldn’t have tweeted abt the car. Bye.

Ya mans really drove to a protest in a Porsche to do this here pic.twitter.com/kKhmOhkMeq

Whom’s mans is this?! Can y’all come get him. Thanks.