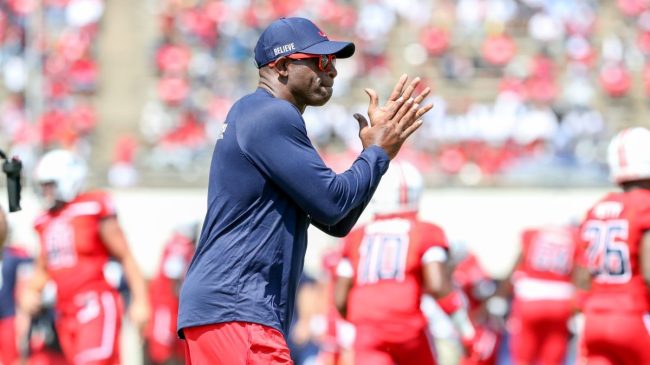 Deion Sanders’ time as the head coach at FCS Jackson State University has been must-see TV. From flipping the No. 1 recruit in the country from Florida State, to getting in postgame scuffles with opposing coaches, Coach Prime has built a reputation as the nation’s most compelling coach.

Apparently, the bigwigs at Amazon Prime seem to agree. And they’re doing everything possible to cash in on the Pro Football Hall of Famer.

Doug Samuels of Football Scoop reports that Amazon Prime is producing a four-part documentary series on Sanders and the Jackson State program.

Coach Prime is coming to Prime (with a new documentary)https://t.co/YFAB06EOMT

Sports Business Journal also shared a clip from the first episode of the series. The clip shows Sanders relocating his team to a hotel for a week amid the Jackson, Mississippi water crisis.

Coach Prime is coming to Prime 📺@PrimeVideo has announced a 4-part documentary on @GoJSUTigersFB and @DeionSanders that will debut in December 🏈#SBJWCOS pic.twitter.com/VUUmocut8i

Amazon’s press release reveals that the series will debut in December and follow Jackson State at practices and games.

The series follows the JSU Tigers at practice and games, in the locker room, off the field, and in the community, amid the team’s quest for an HBCU National Championship during a season unlike any other. This season’s unforgettable and inspiring journey includes “Coach Prime” welcoming the nation’s top recruit, Travis Hunter, to Jackson State, and the team’s exciting performances on gameday.

It features a range of celebrity guests who educate and inspire, and explores how the team and community dealt with a citywide water crisis, all while also changing the lives of young men and women in dramatic ways. It will also focus on Sanders’ broader mission to level the playing field in college sports by raising awareness for HBCUs. Coach Prime will showcase the football program’s impact on the community, demonstrate leadership and learning, and make viewers feel the energy and significance of HBCUs—and their impact on a changing world.

One thing is certain, nobody at JSU seems to be complaining about him.