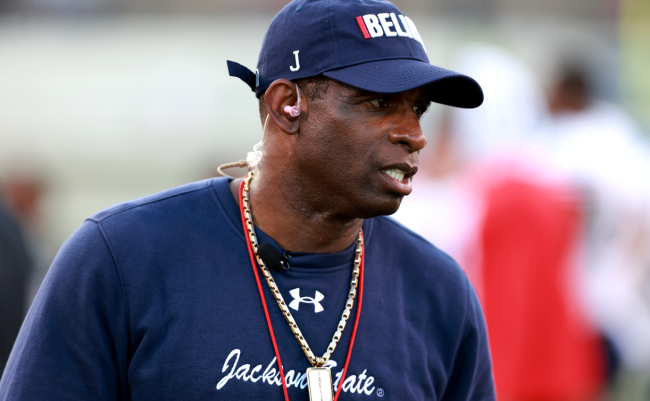 Deion Sanders has a warning for the NCAA now that Name, Image and Likeness (NIL) money is being thrown around like confetti at college athletes.

On Wednesday, Sanders took to Twitter with a video explaining why he sees that as not being a good thing with the caption, “I’m trying to help before it blows up in your face. Money Makes You More Of Who You Really Are. Now think about that for a minute,” wrote Sanders on Twitter.”

“NCAA, you got a little problem. Let me explain,” said Sanders. “With the NIL, which really ain’t NIL because there ain’t no name, image and likeness, it’s just pay per view right now, that’s what they’re doing to the big boys. Little boys, we can’t compete with that, but anyway…

“So I suggest to you to allow college teams to hire more qualified men. Qualified. That can handle these young men that’s getting this money,” said Sanders, ending the video.

⁦@NCAA⁩ YOU HAVE A PROBLEM! I’m trying to help before it blows up in your face. Money Makes You More Of Who You Really Are. Now think about that for a minute. God bless u all. #CoachPrime pic.twitter.com/ZbncNK2PDt

Deion Sanders sees college football turning into the NFL, but without any financial guidance for the players

Last week, Sanders discussed college football, the transfer portal, and how the NIL money is making it turn into something like NFL free agency.

“I love for these guys to be able to get paid for their name image and likeness. I love that,” he said. “But, it’s becoming free agency, real free agency, and if you don’t have it [the money], you’re not going to be able to compete.”

Sanders also echoed his point that NIL money is nothing more than pay per view money, saying, “What are they endorsing? You seen them on anything? I ain’t seen them on nothing … I don’t understand the value of a high school kid or a college kid for my company, and I own several. What is the value, when everybody don’t know you? I mean, you’re not penetrating all these different markets. The demographic you have is probably from 18 to 24 and you’re really not penetrating that. I’m checking your numbers on social and they don’t add up.”

No different from a pro athlete coming into their rookie season, these college athletes need resources, guidance, a support system and accountability when given NIL money/opportunities. No different on a pro team, you need bodies on staff (male OR female) to guide and assist. 🤷🏽‍♀️

The NCAA isn't preventing those teams from hiring those "qualified " coaches you speak of. They are football coaches and hopefully mentors... not financial advisors and psychologist.
The Issue is flat out pay for play which has to be corrected and quickly.

My man! Say it louder coach! Make it a teachable moment for each athlete. If they are fortunate enough to get an NIL deal, then have them pay for school and give the scholarship to another kid. Give them a choice. Like options and benefits in Business. Its all a biz anyway.

The elephant in the room. NCAA should’ve developed a commission to set, monitor and govern a NIL cap that student-athletes can earn per school year. Student-athletes (kids) with that type of money develop “selfishness/entitlement” traits that is going to ruin “college sports”.💯

Simple simple fix, you allow these young men to make as much money as they would like. However they don’t see a single cent of it until they finish their 4 years or leave the university. It sits in a trust until either takes place. I agree no way a 18, 19 hell 35 year old can

Definitely some food for thought… thought that the NCAA should have put into the NIL program way before it was actually implemented.