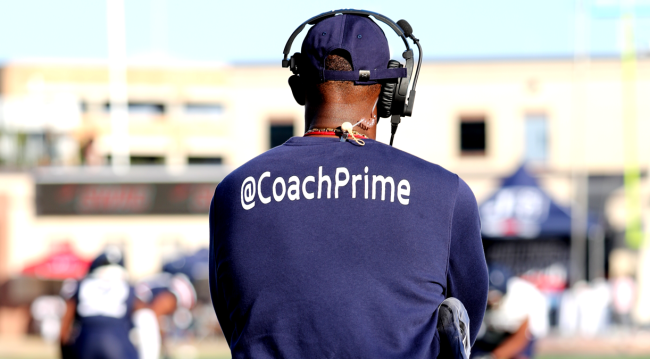 The world of college football has been radically altered over the past couple of years with the transfer portal and the addition of Name, Image and Likeness (NIL) money.

Almost daily there is some report about a top athlete deciding to enter the transfer portal or receiving wild financial offers shrouded as NIL money. Sometimes both.

Sometimes a player just turning down a big NIL deal is reason for fans to question what exactly is going on behind the scenes at certain college programs.

Recently, Texas running back Bijan Robinson signed an NIL agreement with Lamborghini, marking yet another step in college football basically turning into a minor league for the NFL – a minor league with tens of millions of broadcast viewers.

One person who is well versed in both worlds, college football and the NFL, Jackson State head football coach Deion Sanders, recently spoke to Carl Reed of 247Sports about the rapidly changing college sports landscape.

When asked for his take on the new NIL money and the transfer portal, Sanders replied, “I like it. I love for these guys to be able to get paid for their name image and likeness. I love that. But, it’s becoming free agency, real free agency, and if you don’t have it [the money], you’re not going to be able to compete.

“It’s just another way, to me, to keep the schools that don’t have the proper funding down.”

Sanders continued, “First of all, I’m not giving a kid nothing like [the recent big NIL deals]. I want you to focus on the N-F-L, not the N-I-L. You ball out, and you prepare yourself for the N-F-L. If you get comfortable when you’ve already got deal and you got that coming, I mean, come on! How hungry are you gonna be to go out there and work and go get it?

Sanders went to talk about how players, even if they’re being offered a ton of money, still need to make sure the school they choose is the best fit for them.

“You can be rich and unhappy,” he said. “I’ve been that before.”

He also talked about how many transfer portal decisions are made before the player even enters it, and wondered about all the reported million dollar NIL deals when he hasn’t seen a single one of these players on anything.

“What are they endorsing? You seen them on anything? I ain’t seen them on nothing,” said Sanders, adding, “I don’t understand the value of a high school kid or a college kid for my company, and I own several. What is the value, when everybody don’t know you? I mean, you’re not penetrating all these different markets. The demographic you have is probably from 18 to 24 and you’re really not penetrating that. I’m checking your numbers on social and they don’t add up.”

The entire conversation provides some fascinating insight from Coach Prime.