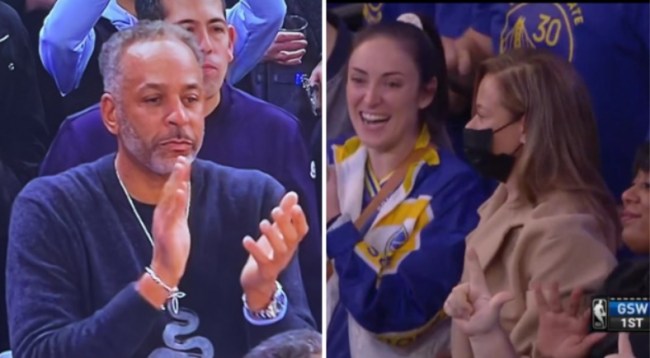 Steph Curry’s recently divorced parents were on hand to watch their son break the all-time NBA three-point record, and it was pretty awkward.

Back in August, Dell Curry filed for divorce after accusing his wife of 22 years, Sonya Curry, of cheating on him with former Patriots tight end Steven Johnson.

Dell and Sonya were seen sitting separately at Madison Square Garden on Tuesday night as Steph broke the three-point record.

After Steph broke the record, Dell was one of the first people to give him a hug on the court.

It all started with a dream. pic.twitter.com/BoJj9Ce00b

Steph waited until the next timeout to hug his mom.

Fans noted how awkward the whole thing was.

He got the sweater tucked in to show the Gucci belt like them old school playas. He’s divorced AF pic.twitter.com/z30vBUQd1j

No one has ever looked more divorced than Dell Curry pic.twitter.com/yJLcDZ206e

Dell Curry finally is on the prowl again 🤣😂😅 https://t.co/FXZsjawFkc

This pic of Dell Curry is the definition of down bad pic.twitter.com/42xuGYAecN