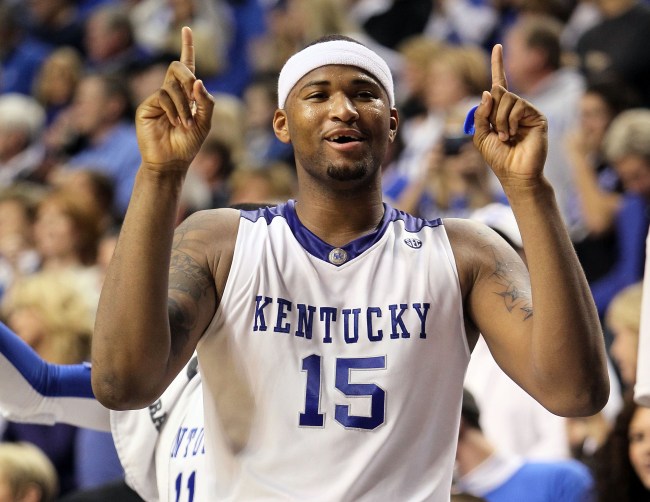 Zion Williamson’s bizarre injury last night was another reminder of the risks associated with NBA talents playing college ball, when it’s ultimately a poor business decision. Several NBA figures have publicly expressed their disdain for the NCAA hijacking young players who have the ability to play at the highest level.

Speaking about how much money the NCAA made from last night’s Duke/UNC game, Donovan Mitchell tweeted, “something has to change.” Luka Doncic added “go play in Europe.” Isaiah Thomas said “Let these kids go straight outta high school!!!” before urging Williamson to sit “sit his ass down” to preserve himself for the NBA.

Warriors big man DeMarcus Cousins, who had a cup of coffee at Kentucky before turning pro, spoke passionately to reporters about college being a detriment to supreme talents.

DeMarcus Cousins: “Knowing what I know now, college basketball is bullshit.” Advises Zion Williamson to get ready for the NBA. pic.twitter.com/k3B1JA0E42

Here is what Cousins said, as transcribed by For the Win:

“Knowing what I know now? College is bullshit. College basketball, the NCAA is [expletive]. My advice for him is do what’s best for you and your family. Obviously college isn’t. It does nothing for you at this point. You’ve proven you’re the No. 1 pick coming out, you’ve proven your talent. Get ready for the next level, because it’s happening. That’s my opinion, knowing what I know now.

Obviously when I was at that age, you know, you enjoy the moment, you enjoy the experience and all that. But it’s so many risks involved to get to the ultimate goal, which is this level.”

Cousins went on to call the one season he spent with John Wall reaching the Elite 8 in 2010 “the best years of my life playing basketball,” but is uncomfortable with the NCAA pocketing billions on the backs of the talent.

“I loved my experience in college, that was some of the best years of my life playing basketball. But with that being said, just how crooked the whole NCAA business is.

Cousins: “How much does Zion Williamson get? That’s who they’re coming to see. So how much does he get? Actually, who does it go to? How does it benefit any player on that team? But if they were to get $20 and a free meal, they’re this bad kid. They get a bad rep. ‘Uncoachable.’ They’re ‘thugs.’ Whatever the case may be. It’s bullshit. It’s been bullshit.”

What do you guys think? Should Zion sit for the rest of the season before entering the Draft or should he try to win a title with Duke before bailing?