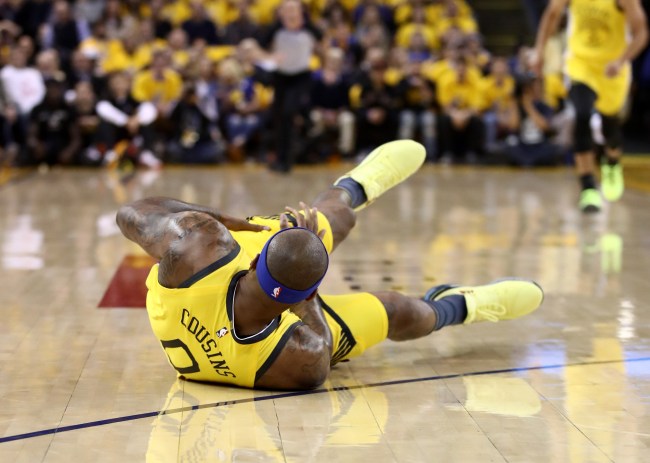 I’m no doctor, but the quad injury DeMarcus Cousins suffered less than four minutes into Game 2 of the Warriors-Clippers first-round playoff series looked horrifying. A sad scene for a guy who just returned to action in mid-January after missing a full year of ball when he suffered an Achilles injury with the Pelicans.

Here’s video of the DeMarcus Cousins injury via @NBCSWarriors. Grabs at that left leg. pic.twitter.com/gVT2cXPbng

Cousins is expected to have an MRI Tuesday morning to determine his fate, but reports indicate that it could be a torn quad, an injury that ended Charles Barkley’s career back in 1999. The best case scenario would be a strained quad, but this close-up snapshot of Cousins’ quad on his walk to the locker room does not look natural.

DeMarcus Cousins quad isn’t supposed to do that.. #Warriors pic.twitter.com/2aZ5GGa0A8

“There’s a pretty significant quad injury,” Warriors coach Steve Kerr said after the game. “We’ll get an MRI [on Tuesday], but he’s going to be out for — I’ll just say a while because I think it’s unclear right now how long he’ll be out. It’s significant.”

Steph Curry added: “It’s tough, for sure. You feel for him considering what he’s been through this last year. This is a big stage, the playoffs. He’s been looking forward to this. I don’t know the extent of the injury at this point. Hope he gets back sooner than later. Just man-to-man in terms of him, what he’s been through, it’s tough for sure. There’s no sugarcoating it at all. You hate seeing that opportunity again on this big stage taken away from him like that.”

Many fans are saying that Cousins quad looks like the quad tear sustained by Triple H back in 2000. At the time, the wrestler said the injury felt like he got “shot in the thigh.” The dude miraculously finished the match, even suffering through the Walls of Jericho move, claiming it was “the longest thing I’ve ever done in my life.”

Hopefully the MRI shows something different than a near certainty of a quad tear.