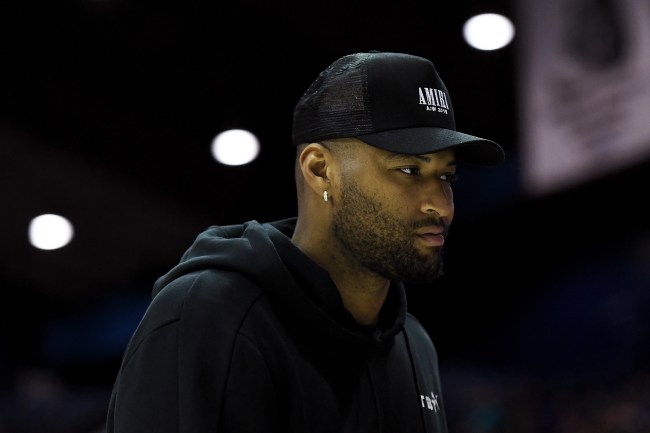 Just two weeks ago, the hearts of the entire sports world ached for DeMarcus Cousins after the 29-year-old tore his ACL while playing pickup with some average Joe’s in Vegas.

This story may not garner as much sympathy.

Take a look at the happy couple.

Things turned a bit sinister 24 hours prior to this picture being snapped when Boogie allegedly had a verbal altercation with his ex and baby momma, Christy West, over their 7-year-old son attending their father’s wedding to a new woman.

West recorded the alleged threat and claims she played the audio for court officials, which has since been obtained by TMZ Sports.

West claims she made the recording of the phone conversation at a trampoline park in Alabama with their son.

“I’m gonna ask you this one more time before I take it to another level,” the man says … “Can I have my son here, please?”
Christy responds, “No” — and that’s when the man makes the alleged threat — “I’m gonna make sure I put a bullet in your f**king head.”

https://twitter.com/mvalle888/status/1040525910108262401?s=20
The audio then cuts off, but West has filed court docs indicating that Cousins told her he was going to kill her “even if he didn’t have to get his hands dirty doing it” and indicated that Cousins had choked her during a previous incident.

West is aggressively pursuing charges against Boogie, filing for a restraining order and also going to the Mobile Police Dept. to file a report with the cops.

I’m not here to speculate, but I can all but guarantee that if Boogie wasn’t getting married to another woman, Christy probably wouldn’t have ran to the cops.

Oh, and it goes without saying, Boogie’s 7-year-old son was certainly not in attendance for his wedding.