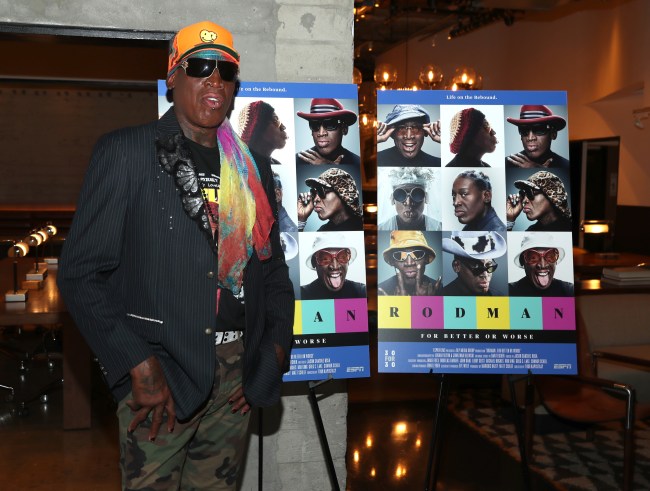 Dennis Rodman is one of the most interesting athletes and personalities of all-time. A five-time NBA champ and two-time Defensive Player of the Year, the man known as “The Worm” never held back from showing his feelings. From head-butting referees, to showing up to a book signing in a wedding dress, to falling in and out of rehab, Rodman’s life has been defined more for his unpredictable behavior on and off the court than anything else.

As a member of the Basketball Hall of Fame, Dennis Rodman’s hoops career was as successful as it was misunderstood. And to really get to know the guy, ESPN+ is releasing their newest 30 for 30 documentary on him, entitled “Rodman: For Better or Worse”, which is exclusively streaming on the app beginning October 1. To say it’s a must-watch is an understatement, as the entire film weaves through the life of Rodman — and it reveals quite a bit about who he really is.

“Rodman: For Better or Worse” is directed by Todd Kapostasy, and goes deep in telling the entire story of Dennis Rodman. Here’s the trailer, which was released back in August.

From homelessness as a kid to small college hopeful and, finally, to NBA stardom, the latest 30 for 30 features interviews with some of Rodman’s more famous teammates, including Michael Jordan, Isiah Thomas, David Robinson and others, who all help define the man (and myth) known as “The Worm.” And the only place to watch it is on ESPN+, which is available for just $4.99/month.

So, wondering about some highlights of the new 30 for 30 about Dennis Rodman? Here’s some info on what to expect from the in-depth documentary.

Remember, ESPN+ is the only place to stream “Rodman: For Better or Worse”, with the documentary available on demand on the streaming app for 21 days beginning on Wednesday, September 11, following its live release on September 10.

Whether you’re trying to get hyped for “Rodman: For Better or Worse”, or trying to get the most intensive sports content at all times, ESPN+ is your go-to spot. Plus, here’s a friendly reminder that ESPN+ is only $4.99/month meaning you can get all the content you want from the sport without committing too much.

With all the sports content a fanatic could ask for, ESPN+ is the premier destination to get in on all the action. Whether it’s watching every single 30 for 30, streaming college football all season long, tuning in to the exclusive UFC content, or watching other live sporting events, among other stuff, no streaming service has it like ESPN+ does.