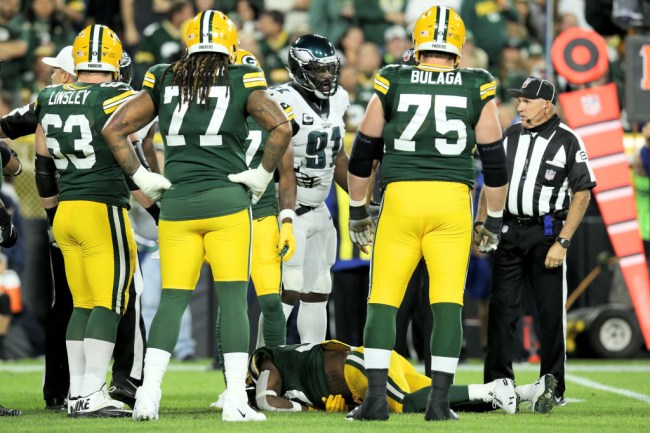 It took longer than it probably should have, but in 2010, the NFL updated its rulebook in an attempt to reduce the number of helmet-to-helmet hits by instituting a review system that would allow the league to fine and suspend players for questionable collisions.

A couple of years ago, the league would take another leap forward when it announced it would be following in the footsteps of the NCAA by ejecting players who were deemed guilty of targeting in an attempt to further promote player safety.

However, it appears they still have some work to do.

In the first quarter of last night’s game between the Packers and the Eagles, Jamaal Williams was being dragged down by three defenders before he found himself on the receiving end of a brutal hit from Derek Barnett, who knocked the running back out cold.

Dirty and late hit by #Eagles DE Derek Barnett. #Packers RB Jamaal Williams had to be taken off on a stretcher. Just unnecessary. pic.twitter.com/6TDDYlKzXy

Williams had to be carted off the field on a stretcher and ultimately found himself in the hospital.

Barnett, on the other hand, was hit with an unnecessary roughness penalty but was allowed to remain in the game for reasons I’ll never be able to fathom.

If you woke up this morning hoping some justice would be served after the fact, I may have some bad news, as Adam Schefter reports the league will not be suspending Barnett for the hit (although there is a chance he could be fined).

Eagles’ DE Derek Barnett is unlikely to be suspended for his hit last night on Packers’ RB Jamal Williams, per source. Barnett could be fined, but he likely will be spared a suspension because at the last moment, he turned and hit Williams with his shoulder.

A suspension is not being considered for Eagles’ DE Derek Barnett, per source. https://t.co/21GAeWxbod

It is worth noting Barnett seemed to realize he’d made a very poor decision, as he went to check on Williams before the running back was taken away.

Derek Barnett checked in on Jamaal Williams before before he was carted off the field.🙏 pic.twitter.com/FgsShv2V20