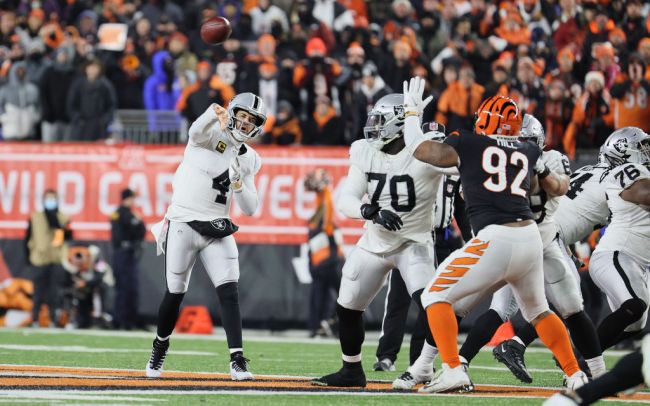 Derek Carr and the Las Vegas Raiders defied the odds last season by making it to the playoffs for the second time in Carr’s career in spite of the team changing coaches mid-season and numerous issues off the field for their players.

Once there, they took the eventual AFC Champions down to the wire, losing by 7 in Cincinnati. The loss kept Carr without a playoff win through the first 8 seasons of his career.

This has led some fans to question whether Carr will ever be able to win a playoff game for the Raiders. According to Pro Football Talk, he thinks that question is ridiculous.

Derek Carr: Questioning if I can win a playoff game is ridiculous. https://t.co/6UL1ajX9P1

“The question of, Can I win a playoff game? Yeah, that’s ridiculous. Yes. Just because we haven’t, just because we had one chance and we lost in the last series of the game to the AFC champions? Yeah, I think we can,” Carr said. “It just shows you how close we were. But with that said, 55 percent of the teams that make the playoffs, the next year don’t. So the odds are against us. I like that kind of thought process better, so I’m going to keep that underdog mentality, and that chip on the shoulder mindset. But at the same time, I know what I’m capable of, I know what our team’s capable of, and I’m excited to see. I know we have to earn that spot, I think we were a fifth seed something like that, and now we have to earn more than that. That’s the goal. With this division that will be tough, but we’re excited for that challenge.”

Carr might take some comfort in knowing that there were plenty of people asking the same question about Matt Stafford just last season. We all saw how that turned out for Stafford as he won 4 of them in a row and won a Super Bowl to finally bring an end to that narrative.

The Las Vegas Raiders might not have the monster defense the Rams did last season, but if Carr can make it through a stacked AFC West to make it to the playoffs, there’s no reason to believe he couldn’t lead them to a win this season once they’re there.