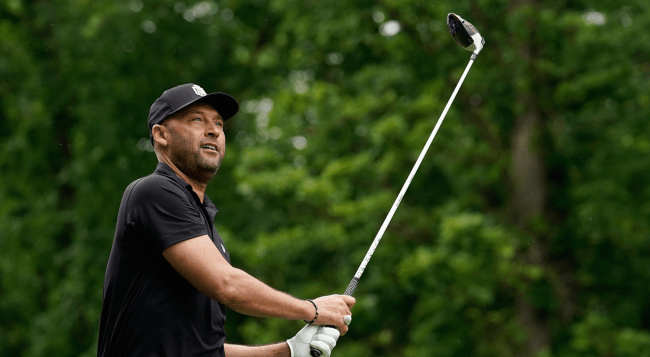 Now that he no longer has the headache of having to deal with being the CEO of the disaster that is the Miami Marlins franchise, “The Captain” Derek Jeter has had much more time to devote to his golf game.

He’s gotten pretty good at it too, despite the fact that back in February he tried to downplay his skills when asked who would win a match between him and Michael Jordan.

“I just started out playing golf when I retired, and then I haven’t played much in the last four years,” Jeter said. “Plus I’ve got two girls, so I don’t have time to go play golf.”

The baseball Hall of Famer must have found some time recently, because over the weekend, playing alongside his partner, Hall of Fame golfer Juli Inkster, Jeter took home the trophy at the American Family Insurance Championship.

Jeter and Inkster were paired up with Brett Favre and two-time U.S. Open champion Andy North, drawing a huge group of spectators while they were on the course.

The pairing of Jeter and Inkster ended up defeating Favre and North by three strokes.

Derek Jeter made some new fans, including one youngster in the gallery, this weekend

Among that sizable crowd was a young fan who decided to wish Derek Jeter well as he stepped up to the tee on one of the holes.

“Thank you,” Jeter replied with a point and a nod.

Then, as he walked up to address his ball, Jeter turned back to the young fan (who was wearing a Wisconsin shirt) and said, “I’m gonna turn you into a Michigan fan.”

This drew a chorus of “oooohs” from the gallery, causing Jeter to quickly spin around and tell the crowd, “I was just playin’.”

After roping his drive, Jeter grabbed his tee and walked over to dap up the young fan whose day was very clearly made by the gesture.

“Finally took home a win at @amfamchampionship with @juliinkster. Great tournament for a great cause with Juli, Andy, @brettfavre and all the fans!” Jeter wrote on Instagram following the victory.

The celebrity foursome tournament ended up raising $45,000, to be split up between the American Family Children’s Hospital and the Second Harvest Food Bank, and it appears that a good time was had by all.