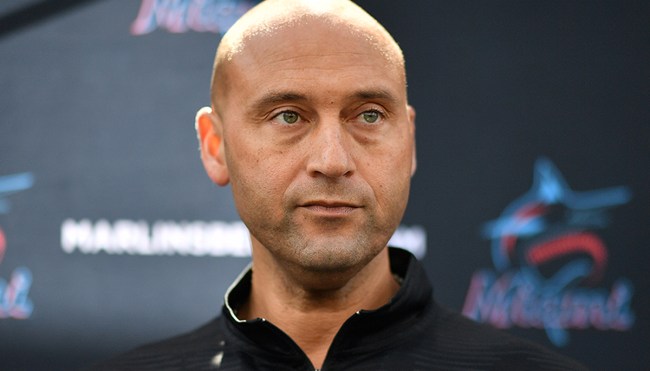 Derek Jeter could’ve easily spent the rest of his days resting on the many laurels he earned up over the course of his legendary career with the New York Yankees when he retired in 2014, but it didn’t take long for the man who racked up basically every accolade he could during his 20 seasons in the MLB to set his sights on a new venture.

In 2017, the Miami Marlins promised a fanbase that hadn’t seen the team sniff the playoffs for over a decade that a “new era” had arrived after Jeter was hired as the CEO of the franchise. Unfortunately, that did not end up being the case, as adding the Hall of Famer to the front office didn’t do much to solve attendance issues that were arguably exacerbated by questionable business decisions and some very suspect roster moves made under his watch.

On Monday, we learned that era has officially come to an end, as Jeter explained his decision to step down as CEO in a short message posted on The Players’ Tribune (he will also be selling his stake in the Marlins, an investment that appears to have worked out much better for him than the job did).

Jeter reportedly paid $25M for his stake, net over nearly five years would be around $20M. https://t.co/baRX4daR9F

After the news broke, a number of people chimed in to react—including David Samson, who had served as the president of the Marlins for 15 years before Jeter relieved him of his duties after taking the helm.

While Jeter and Miami used the classic “differing visions” excuse to explain their divorce, Samson floated a different theory while guessing what really went down (he may not have openly gloated about Jeter’s demise, but you don’t have to read too deep to figure out how he feels about the development).

There were likely no real philosophical differences. There were revenue promises made that didn’t come true. Jeter thought not being me was all that was needed to succeed. He could no longer blame old regime. Been too many years. https://t.co/UvCaT0jIPO

That had to feel good to send.