As If Fans Needed Another Reason To Not Go To Marlins Games, Jeter Just Closed The Park’s Nightclub And Pool 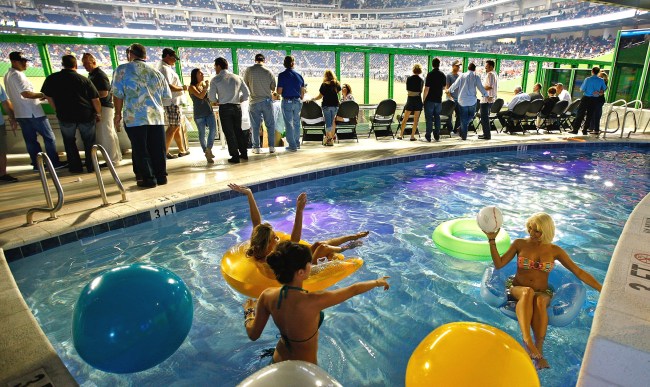 Baseball fans looking for a reason, any reason, to attend a Miami Marlins baseball game this summer just got one less reason to do so as the team has officially closed the Clevelander nightclub and swimming pool.

Located beyond the left field wall at field level, the Clevelander had been in operation since Marlins Park opened in 2012, but new management, headed by Hall of Fame shortstop Derek Jeter have chosen to go in a new direction.

So no more pool, no more dancers, and no more DJs at Marlins games.

Since 2006, the Marlins have failed to reach .500 in any season, winning less than 70 games four times including each of the past two seasons (63 and 57 respectively – both under Jeter management) for the third and second worst seasons in the franchise’s history, only “topped” by the 54-108 season in 1998, the year after the team won 92 games and the World Series.

“We are excited about the future use and potential of the field-level space as a fan destination within Marlins Park for a wide variety of audiences,” Marlins chief revenue officer Adam Jones said in a statement.

Good thing Jones is excited about the future use of the space in the park because the MLBPA once again, for the third time in a decade, filed a grievance against the team for not spending its revenue-sharing cut to improve the product on the field.

Marlins ownership says it will be altering the space, installing new seating and, thank goodness for anyone who does go to a Marlins game, the bar will remain open.