Derek Jeter Talks Who Would Win In Golf Between Him And Michael Jordan, Reveals His First Big Purchase Ever 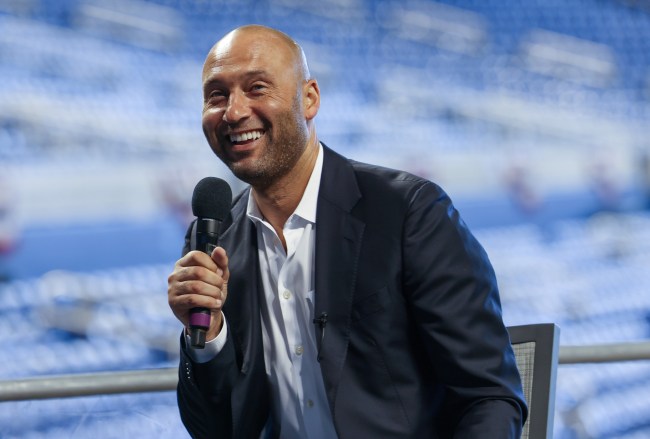 A little refresher on the hosts, Quentin Richardson and Darius Miles were actually teammates on the Clippers back in the 2000-2001 NBA season. They earned the duo nickname as the “Knuckleheads” thanks to their signature celebration where each one would double-tap their own head with balled-up fists.

Now they’ve got their podcast show together hosted by The Players’ Tribune. What’s cool about the show is they interview those inside the basketball world—young and old—as well as individuals outside of the game.

Richardson and Miles recently sat down with Derek Jeter for a recent episode.

This interview has tons of great stories from the Yankee Captain. Richardson and Miles ask Jeter everything from what it was like playing in his first World Series to being signed by the Jordan brand.

They also get Jeter to answer some awesome, out-of-the-box questions. One question I liked was on who would win in a golf game between him and Michael Jordan.

What’s funny is Jeter essentially concedes Jordan would win, but he does it without saying “no.”

The great thing about golf is the thing they call ‘handicaps’—the worst you are the more strokes you get. It evens things out. You know I just started out playing golf when I retired, and then I haven’t played much in the last four years. Plus I’ve got two girls, so I don’t have to go play golf. He (Jordan) has been playing his whole life.

Another great question asked Jeter was what his first big purchase was. Jeter reveals it was a Mitsubishi 3000 when he was 18 years old.

Here’s an awesome quote on what Jeter played on the CD player when he got the car.

First thing I bought? A Mitsubishi 3000. I was 18 years old after my first year. Popped a Tony Terry CD in there— was the first CD I played in it.

We all love to hear who professional athletes looked up to as they were growing up. Here’s Jeter answering a question to his 5 favorite ballplayers. The first is Dave Winfield.

To give you an easy list here are the 5 names mentioned in order:

Winfield was Jeter’s favorite because he grew up a Yankees fan and Winfield was one of the best players on the team during that time period (if not the best).

Jeter said he watched a lot of shortstops, so that’s why the rest are all of that position. The last two mentioned—Alan Trammell and Barry Larkin—had ties to Michigan, the state where Jeter grew up.

You can watch the entire interview down below. It’s about an hour and a half long, perfect for listening to during the work day or on a car ride.

Leave it to The Captain to give us some great baseball content while we wait for the lockout to end.