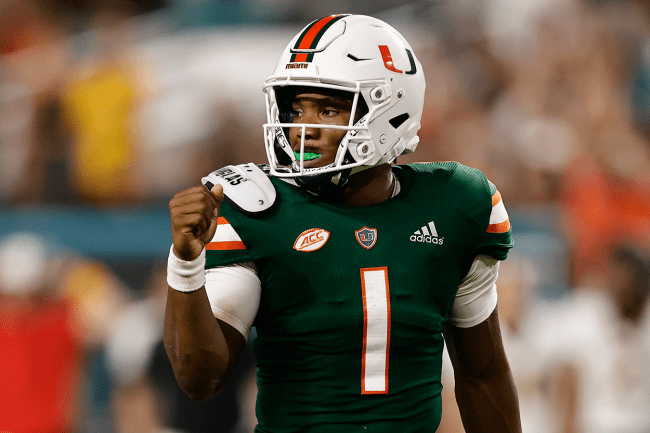 D’Eriq King’s path to the NFL has been anything but ordinary. The 24-year-old played six years on the collegiate level and played two different positions.

Now, after being signed by New England, he is going to be a jack of all trades.

Bill Belichick’s plan for D’Eriq King with the Patriots is going to be a lot of fun.

King, who enrolled at Houston as a three-star, dual-threat quarterback recruit in the Class of 2016, stood 5-foot-9.5, 170 pounds. He got to campus and immediately made the transition to wide receiver as a freshman after the Cougars suffered a multitude of injuries at the position.

In his first year, King caught 29 balls for 228 yards and a touchdown in 10 games with four starts. As a sophomore, he split time between the two position rooms.

After leading a comeback win at quarterback against South Florida, he took over the starting job. King completed 90 of 139 passes for 1,260 yards and seven touchdowns on the season.

As a junior in 2018, despite having his season cut a game short due to injury, King burst onto the scene and scored 50 total touchdowns. Only Kyler Murray and Dwayne Haskins had more total touchdowns that year.

As a result of his impressive 2018, there was a lot of hype around King in 2019. However, after just four games, he chose to redshirt for the remainder of the year and then transferred to Miami.

Upon his arrival in Florida, King was in the preseason Heisman Trophy mix and delivered a fantastic year. He was a semifinalist for the Maxwell and Davey O’Brien Awards after throwing for 2,686 yards and 23 touchdowns, and rushing for an additional 538 yards and four touchdowns en route to an 8-2 record during the COVID-shortened year.

Unfortunately, during the Cheez-It Bowl, he tore his ACL. After recovering during the offseason and playing three games as the starter in 2021, King underwent season-ending shoulder surgery.

Because of his injury history, King’s NFL draft stock was nearly nonexistent.

Today, at 5-foot-11, 202 pounds, King is hoping to first make New England’s roster and then carve out a role. To do so, like many teams asked him to during the pre-draft process, he will have to switch positions— kind of.

King will still be a quarterback in New England. But he will also be a running back, wide receiver and kick returner.

Belichick has plans to use King wherever he can fit. Maybe there will be unique King-focused packages. Maybe he will move to the slot like Julian Edelmann, who was also a college quarterback. Perhaps he will line up in the backfield next to Mac Jones.

“I’m excited, it’s good,” King said to Pro Football Network. “I was a little nervous because of the unknown, but I was blessed enough to sign with a team like the Patriots. I’m thankful for the opportunity. It was an exciting time. I talked to (director of player personnel) Matt Groh, and he was excited. I’m thankful for the opportunity. He told me I’ll do a little bit of everything — receiver, quarterback, running back — whatever I can do to stick.”

There is no telling how he will be used, but with Belichick on the joystick, there is no doubt that it will be interesting and fun to watch. King is an athlete, and if he can make the roster, he could quickly become one of the most interesting, versatile players in the league.