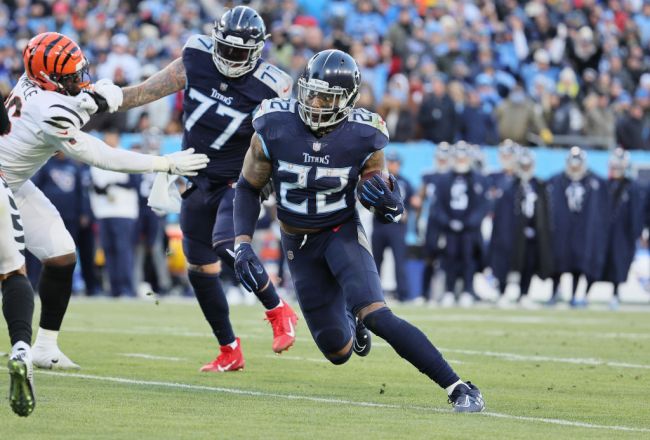 When the Tennessee Titans traded up to take Malik Willis in the 3rd round of the NFL Draft, it was a move that didn’t go over particularly well with the team’s starting quarterback, Ryan Tannehill.

Luckily for the Titans, they aren’t having the same problem with their star player. The team spent a 4th round pick on running back Hassan Haskins despite the fact that they already have Derrick Henry, who has led the NFL in rushing yards in 2 of the past 3 seasons, on their roster.

Today, Henry was asked about that decision and he only had positive things to say about the team’s decision to draft Haskins.

Henry on the #Titans drafting Hassan Haskins – “I was excited when we got him. Hassan’s a beast.” Said he watched him in person once and thought he was huge.

It’s likely that part of the reason Henry is excited about the move is because he knows that his job is secure, unlike Tannehill. In fact, bringing in Haskins could give Henry a welcome break after years of carrying heavy workloads for the Titans.

Henry has averaged just over 23 carries per game over the past 3 seasons, including an unbelievable 27.4 carries per game last season before he was injured. Now he’ll likely be hoping that Haskins can provide the Titans with an alternative option for some of those carries as he tries to avoid suffering another major injury.

Now that the team has paired Haskins with Henry, we can expect the Titans to be as run-heavy as ever, especially since they now shouldn’t have to worry about overworking Henry to keep their run game working.