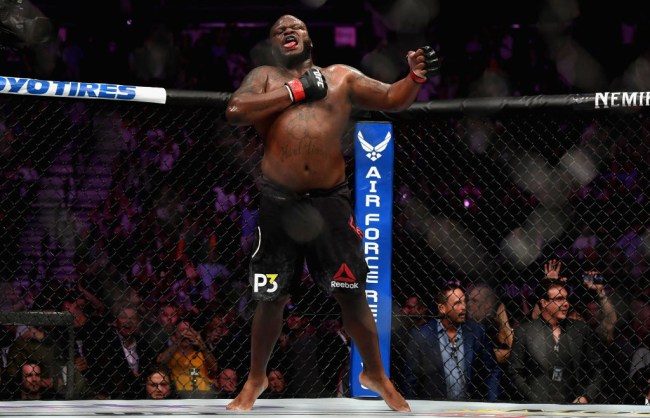 Not only is a he a really good dude (his rescue efforts during the devastating Houston flood were tremendous), he is hands=down one of the most entertaining fighters on the mic.

Back in February of last year, after knocking out Ronda Rousey’s boyfriend Travis Browne he went after him in the Octagon for “putting his hands on women” then followed that up later in the interview with, “Where’s Ronda Rousey’s fine ass at?”

A year later, Lewis was back in the octagon for another UFC Fight Night broadcast when after delivering another knockout, this time to Marcin Tybura, he gave a very sexual shout out to his girlfriend.

Then, in his most recent fight at UFC 229, after mounting a furious comeback that ended up with him, you guessed it, knocking out Russian Alexander Volkov, Lewis took his shorts off after the fight. When asked why, he gave this all time classic answer: “My balls was hot.”

“The Black Beast” also told the UFC 229 crowd that the reason for his third round knockout of Volkv was because Donald Trump called him and told him to “knock this Russian motherf**ker out.”

So, when Lewis was asked about his upcoming heavweight title fight against Daniel Cormier during an appearance on The Rich Eisen Show, Lewis once again delivered the goods.

“Right now I’m a 2X. Usually I’m a 3X but I’m slimming down a little bit so I’m a 2X,” Lewis told Rich Eisen. “I’ve been doing nothing but cardio. Even the sex. The sex really been helping my hips. I know Cormier is a wrestler so you really got to get them hips down on him so I’ve been working them hips really good.”

But… aren’t fighters supposed to avoid sex before a fight? I mean, Mickey did tell Rocky, “Women weaken legs.”

“Not me. Sometimes, a couple of times, I had sex the same day as I fought,” revealed Lewis. “Just to see if that myth was right, and it wasn’t right. But I was sleepy afterwards but I still had the energy though.”