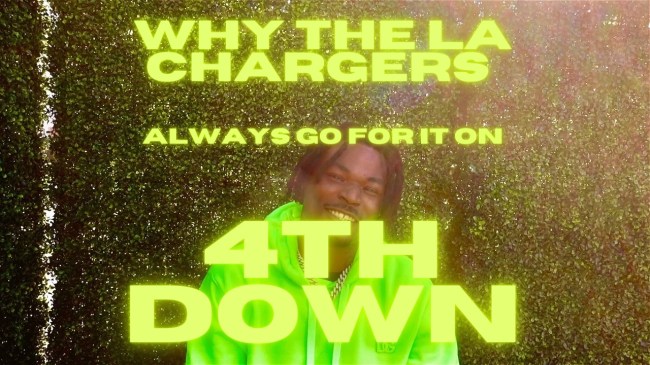 Los Angeles Chargers head coach Brandon Staley really doesn’t like to punt. He went for it on fourth down 22 times during the 2021-22 NFL season, marking the most of any team in the NFL.

While Staley is calling the shots, it’s safe to say the Chargers really like being aggressive. In the final game of the regular season, against the Raiders, the Chargers went for six fourth downs.

Last week, Justin Herbert gave an approving nod of confidence in the call to go for it. On PFT Live, the quarterback explained his opinions on punting:

“Selfishly, as the quarterback, I want to be on the field for every fourth down,” Herbert said. “Whether that’s smart or not, that’s not my call to make. Whether it’s fourth and short, fourth and long, I really believe in the guys we have, and I believe if we don’t get it our defense can come up with the stop. So having the opportunity to go for it and change the game if you do get those, I think that’s big for our team because of how aggressive we are.”

Last week, before the Super Bowl, I talked to LA Chargers safety Derwin James about his quarterback’s comments on punting. Derwin James swung by the GilletteLabs with Exfoliating Bar rollerskating rink in Santa Monica to talk about the 2021 season, the Pro Bowl, and his off-season plans. His visit included a quick trip to the GilletteLabs barbershop.

Why The Los Angeles Chargers Always For It On 4th Down

“We don’t believe in punting,” Derwin James explains. “If they’re going to get the ball anyway, why not just give our offense a chance with Justin Herbert trying to get the first down? We’re going to punt it and give it to them anyway. If we’re going to sacrifice 20-30 yards, OK defense – we have to get the stop anyway.”

“That’s how we think,” James adds.

“I can’t wait until we’re not in those situations and we’re winning the game and people see that they’re aggressive and believe in themselves… It’s fun.”

“And on defense, it just gives us a chance to get the stop. That’s how I look at it…”

Watch the interview below. James also adds that his biggest regret of the season is the nationally televised Thursday Night Football loss against the Kansas City Chiefs.

He also notes that Chargers quarterback Justin Herbert has “superpowers.” ​