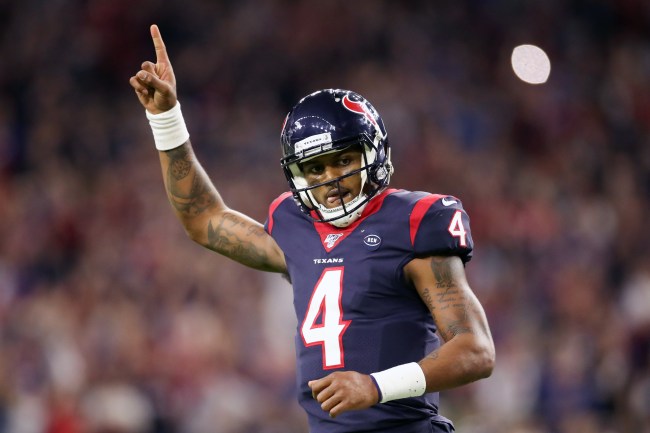 Deshaun Watson is apparently willing to give up tens of millions of dollars to force the Texans to trade him.

According to various reports, Watson doesn’t care about the money and that he just wants out of Houston because his relationship with the team is unfixable.

.@deshaunwatson is willing to sit out the pre-season and miss regular season games if he isn't traded by the #Texans, per @JFowlerESPN

“He could incur $3 million-plus in fines during that process, but he does not care. I’m told the relationship is simply too far gone right now” pic.twitter.com/MM4wgSw0ne

One of Deshaun Watson’s friends, somebody close to him, told me this week that the money is not going to mean anything to Deshaun,” King shared. “That if he says that he’s not playing for the Texans, he sad ‘I think you can take it to the bank.’”

As of now, the Texans are still adamant that they will not trade Watson and are not even entertaining phone calls from interested teams.

Houston continues to avoid conversations with teams in regards to trading Deshaun Watson per sources. They are refusing to trade their franchise QB.

Mike Florio of Pro Football Talk did the math and Watson would lose out on over $20 million if he decided to follow through on his promise to sit out the season.

From mandatory minicamp fines to training-camp fines to fines for missed preseason games to lost regular-season salary to forfeited signing bonus allocation, Texans QB Deshaun Watson could lose more than $20 million if he sits out all of 2021. https://t.co/17K6nOTZf5

First, if the 2021 offseason has a mandatory minicamp and if Watson skips it, he’ll be subject to a fine in the amount of $93,085.

Thus, for the offseason, training camp, and preseason, Watson would incur $3.653 million in fines if he doesn’t show up.

If Watson then skips the season — and if the NFL stages 17 games — he’d lose another $11.16 million in base salary.

On top of that, skipping the season would allow the Texans to recover Watson’s signing-bonus allocation for 2021. That’s $5.4 million in money that he’d have to return.

It’s tough to believe that Watson would actually sacrifice all that money just to spite the Texans.