Deshaun Watson Surprises Teammate With Expensive Gift During Press Conference For Giving Up No. 4 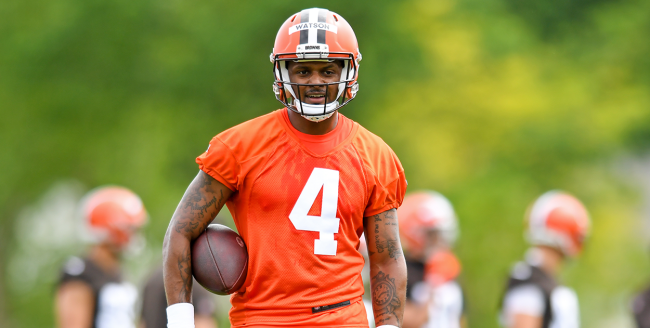 When the Cleveland Browns traded with the Houston Texans for quarterback Deshaun Watson earlier in the offseason, there was a conflict of numbers. Watson has historically worn No. 4 during his career, but that number was already occupied by linebacker Anthony Walker Jr.

Fortunately, Walker had no issue switching numbers for his new quarterback to get his original digit. He not only switched to No. 5, but he did not ask for anything from Watson in return.

Typically, when it comes to NFL numbers — particularly with veterans who are making a large sum of money like Watson — the player coming in and wanting the new number offers some sort of payment in exchange. Watson may or may not have asked Walker if he wanted a blank check, or some sort of gift in exchange, but the 26-year-old linebacker declined.

“Yeah, Deshaun said he was coming to Cleveland, I text him 10 seconds later and said, ‘Welcome to Cleveland, No. 4,'” Walker told reporters on Wednesday. “That was it.”

Even though Walker didn’t ask for anything in return, he got something anyway. As he was at the podium speaking to reporters, an arm appeared from off of the screen with a gift.

It was Watson, with a Rolex. Watson also donated $50,000 to Walker’s father’s charity and plans to buy his suits for the season.

The two briefly hugged it out, and even though Walker was cheesing from ear-to-ear, he declined to open the box in front of the media.

#Browns QB Deshaun Watson surprised LB Anthony Walker Jr. with a Rolex for giving up his No. 4 jersey and not asking for anything in return. Walker now wears No. 5.

Walker proceeded to say that Watson is a good guy and that he appreciates the gift. Now we have to wait and see if he shows off the drip!