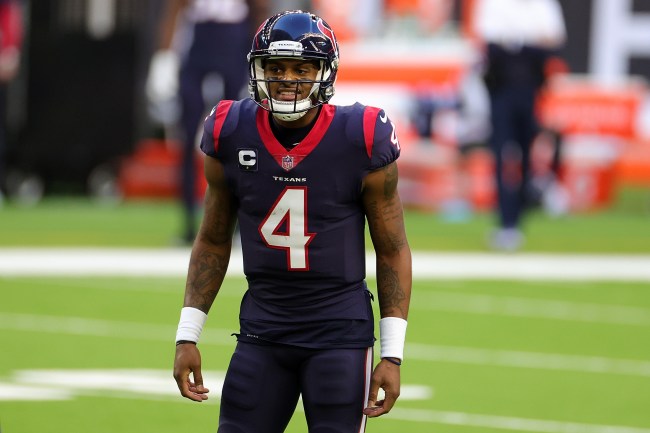 The New York Giants are not in a good place right now. They went 4-13 this season. They haven’t had a winning season since 2016. They just fired their head coach. The GM that built this losing roster just retired.

The Giants drafted Saquon Barkley 2nd overall to be the focal point of their offense. He has struggled to stay healthy and hasn’t looked great lately when healthy. Daniel Jones was drafted 6th to be the team’s franchise quarterback. The offense has been a disaster since he became the starter.

At this point, even the owner of the New York Giants, John Mara, has acknowledged how bad things have gotten. This week, he said this season was “rock bottom” for the Giants.

Unfortunately, it could get worse. Today, a rumor surfaced that would make things much worse. Deshaun Watson is interested in joining the New York Giants.

Sources say Deshaun Watson has expressed a strong desire internally to play for the #Giants — ideally with Brian Flores coaching — where he could also reestablish his brand in the league’s top market. https://t.co/L5cgWw8RTN

I’ll just start by saying, in regards to the things Deshaun Watson is being accused of, the only people in the world who know what actually happened are Deshaun Watson and the women making the accusations.

I have no idea how his situation will end, but what I do know is that fans are not happy with the Giants. Their last game was the most empty MetLife Stadium has ever been. They can’t afford to do anything else to turn fans against them. Signing Watson would do just that. It would turn more fans against them.

To make the idea even worse, it doesn’t even really make sense from a football perspective. If you’re willing to trade for Deshaun Watson at this moment, it’s because you think he can win you a Super Bowl.

There is very little reason to believe that would be the end result of this move. Trading for Watson would be expensive. The Houston Texans want a bunch of first round picks and then some to give up Watson. The Giants can’t afford that.

The current Giants roster won’t win games that matter with Watson. They can’t block. Their receivers aren’t very good and they’re paying one of them a ton of money. The run game isn’t great. The defense is average.

Those are all things that need to be fixed. You can’t fix them without draft picks or cap space. The Giants would have neither if they make this trade.

That would leave them as probably a borderline playoff team. That’s really not worth the storm that would come with making a trade for Deshaun Watson.

There might be teams out there who can afford the bad PR and who might be willing to overlook Deshaun Watson’s situation, but the New York Giants shouldn’t be that team. They should let their new GM build through the draft and rebuild a team that their fans can get behind.