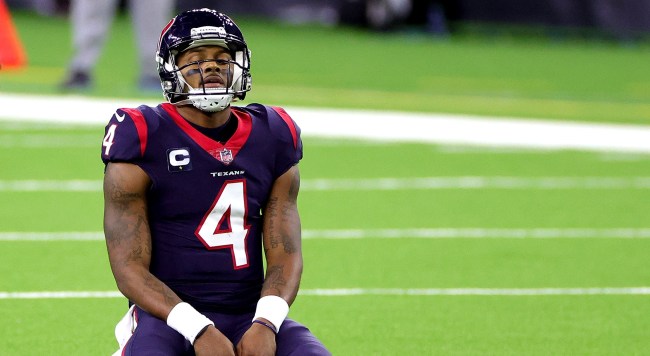 Deshaun Watson has gotten his wish, the Houston Texans have reportedly started taking trade calls for the 25-year-old quarterback. While teams around the league should rightfully inquire about trading for one of the best QB’s in the game, Watson is carrying serious baggage at the moment, to put it lightly.

The former Clemson star is facing lawsuits due to sexual misconduct allegations by 22 massage therapists. Given the sheer number of allegations, the seriousness of them, and the incredibly slow court system, plenty of people out there don’t see why a team would consider trading for a guy with such an uncertain future.

Randy Mueller, the former GM of the New Orleans Saints and Miami Dolphins, went as far as to say that trading for Watson would be “suicidal.”

“I don’t know that they’re going to be able to vet it completely,” Mueller told NJ. com. “I don’t know that the league is going to come clean with their investigation, and I think they’ve purposely put the brakes on it, thinking that it would take its legal course first. There’s just a lot of open-ended questions that I don’t think are vettable at this point.”

The civil suits involving Watson aren’t set to begin until September and he will not be deposed until February 2022, after the 2021-22 NFL season. There is a very high chance that Watson will be suspended by the NFL after a court ruling and with the slow-moving legal system, seeing Watson play by the 2023 season could be a stretch. Watson missing just two seasons could very well be a best-case scenario as well.

Houston’s asking price for Watson is at least three first-round picks plus other pieces. NFL insider Chris Mortensen recently reported that the team’s asking price is some combination of five high draft picks plus starting-caliber players.

So, yes, shipping away your franchise’s foreseeable future in draft picks plus starting-caliber players for a guy that may not play until 2023 could be described as ‘suicidal.’

The Philadelphia Eagles own three first-round picks and have been the team most-linked to dealing for the three-time Pro Bowler.

Related: Eagles May Be The Only Team Dumb Enough To Trade Away Their Future For Deshaun Watson, Who Could Miss The Next 2 Seasons, Minimum