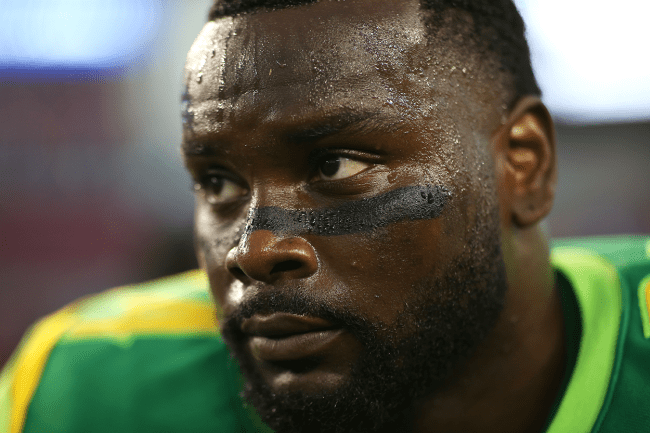 The major headline out of the first weekend of the USFL is likely not what the league had hoped. After three of four Week 1 games were played over the weekend, the biggest story continues to surround De’Veon Smith’s palate.

Smith, a running back who went undrafted out of Michigan in 2017, has been a part of every major professional football opportunity in North America. His most recent seemingly came to an abrupt end over chicken salad.

After he did not hear his name called in the NFL Draft, Smith signed with the Dolphins out of college. From there, he went on to spend time in Washington before playing in the XFL, AAF and CFL.

Now, at age 27, he should be preparing for his first game with the Pittsburgh Maulers of the USFL. Instead, he is at home watching from his couch because of a bizarre incident that led to him being cut by the team before the season began.

Over the weekend, the USFL aired a behind-the-scenes look into the league. During the special, it showed Smith getting cut by Pittsburgh over an allegedly disrespectful situation with a hotel worker.

During the scene, Maulers head coach Kirby Wilson refused to hear Smith’s side of the story. Smith, who was visibly crushed and confused by the decision, tried to say his piece but it fell on deaf ears.

He claims that he did nothing wrong.

Smith says that he did not cuss, nor did he even talk back before choosing to walk away. And yet, despite his claimed innocence, he is not part of the USFL.

Shortly after the clip aired, Smith took to Twitter and shared his initial reaction.

And then he retweeted UMass outside linebackers coach Mike McCray, who said that Wilson was on a power trip by cutting Smith.

Power trip. That’s all that is. Cutting someone over a food preference and making a decision before hearing both sides. @i_BSmith4 the best RB in that league somebody need to pick him up ASAP https://t.co/SY1CCdvhqT

On Monday afternoon, Smith doubled down on his innocence.

He also said that he had teammates around him when the alleged incident occurred.

I even got teammates that was right there… https://t.co/tZPzRRWXM7

We may not ever find out the whole story, but Smith would certainly know more about the situation than Wilson because he was involved and Wilson was not even there and didn’t try to hear the other side. It will be interesting to see where things go from here— if Wilson remains unemployed, if another team picks him up because he is a talented runner, or if perhaps things get litigious.